Manchester City have reportedly agreed personal terms with Cristiano Ronaldo, as the Juventus star looks for a route out of the Italian club.

END_OF_DOCUMENT_TOKEN_TO_BE_REPLACED

Juventus are keen to offload Ronaldo, who is currently taking half a million pounds a week out of their wage budget, but are demanding a fee, while City are hoping to sign the five-time Ballon d'Or winner on a free.

Spanish newspaper AS are reporting that personal terms are all agreed, with earlier reports from Sky Italy suggesting Ronaldo would be paid £12.8m-per-season, just over a third of what he earns in Italy.

AS also report that City have offered Juventus Raheem Sterling as part of the deal, while Juve would prefer to take Gabriel Jesus in return.

There are still factors to iron out before this deal can happen, but the wheels are in motion.

This would cause a civil war pic.twitter.com/GrszPK73bX 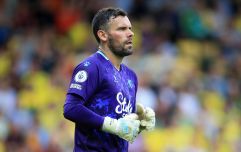 END_OF_DOCUMENT_TOKEN_TO_BE_REPLACED

In signing Ronaldo now, City would be taking a similar gamble on a 36-year-old player who does not press the opposition out of possession, hoping that he will score enough goals to secure one last league title before Pep Guardiola leaves next summer.

City also have a similar fixation on winning the Champions League, and got closer than ever before last season before losing to Chelsea in the final. Would the arrival of Ronaldo help them get over the line? Would Guardiola even trust Ronaldo to play against the toughest opposition given his lack of work off the ball?

We'll have to wait and see.

popular
How did Brian Laundrie’s parents find his remains in a few hours?
Taliban 'behead junior volleyball player and post photos of her head on social media', report says
St James' Park to get new name under Newcastle new owners
The JOE Friday Pub Quiz: Week 266
Real life Squid Game coming to UK and you have to sign a 'medical disclosure' to play
Alec Baldwin asked 'why was I handed a loaded gun?' after fatal on-set shooting
Producer says Alec Baldwin should be charged with manslaughter over accidental shooting
You may also like
Sport
Mohamed Salah says he wants to end career at Liverpool but his future "depends on the club"
Sport
Protesters gather outside Premier League HQ to call for an end to Saudi involvement in football
Sport
Liverpool to hold AFCON talks in attempt to reduce player absences
Sport
Paul Pogba teams up with Stella McCartney to create world's first vegan football boots
Sport
Patrice Evra was "ashamed to admit" he was sexually abused
Next Page