Manchester United youngster Andreas Pereira has been in a rich run of form in recent weeks.

The Brazilian, who is currently on loan with Spanish side Granada, scored his third goal in four games in his club's 4-1 victory over Real Betis.

But his evening was marred by a soft red card, where it looked like he was the victim rather than the perpetrator.

Pereira put his side 3-0 up when he tapped home the rebound after a Mehdi Carcela-Gonzalez shot was saved. 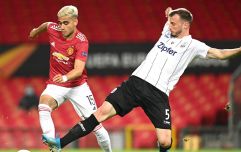 END_OF_DOCUMENT_TOKEN_TO_BE_REPLACED

However, during the second half, the 21-year-old was given his marching orders after a coming-together with Betis player Matías Nahuel, who was also dismissed.

It appeared as though Nahuel slapped Pereira, who was guilty of little more than a nudge to the back of the Spain Under-21 man, but referee Daniel Ocón ordered both players to leave the pitch.

Granada remain in the bottom three despite the victory, which was their second on the bounce at home.

popular
The longest walkable distance on Earth which no one is known to have completed
Brit on holiday beaten with a brick by gang before being thrown in the sea unconscious
Fears surging covid cases could ruin summer holidays with return of tests and rules
Dad who ran off with Ukrainian refugee says couple are doing 'brilliantly' - but he can't see his kids
Men with ‘very large penises’ wanted for new documentary
Teens are turning up to watch Minions in suits - and why cinemas have been forced to ban them
British schoolboy breaks internet after attending prom in sequined tuxedo ballgown
You may also like
Sport
Manchester United 'willing to cash in' on Andreas Pereira
Sport
Andreas Pereira called up to Brazil squad for the first time
Sport
Man Utd graduates played more vs Leicester than City's did during whole of last season
Sport
Paul Pogba silences critics with commanding performance for Manchester United
Sport
WATCH: Andreas Pereria scores stunning free kick against Liverpool in pre-season friendly
Next Page