QUIZ: Name the Man United XI from the last time they led after 17 games

"It's a big game coming up so let's get ready for it."

For the first time in 40 months, Manchester United lead the Premier League standings. This United quiz brings you back, though, to the last time they led the league after 17 games of the season. 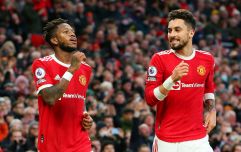 END_OF_DOCUMENT_TOKEN_TO_BE_REPLACED

That was back in December 2012, with Alex Ferguson in charge, and the club leading the way with a record of 14 wins, three defeats and no draws (42 points).

We're giving you four minutes to guess United's starting XI from that day, when Ferguson's side beat Sunderland 3-1 at Old Trafford.

If the United quiz did not display correctly for you, give it a try here.