If anyone knows what Demba Ba is going through right now, it's Luke Shaw.

The Manchester United defender suffered a double leg-break during last season's Champions League - the same injury which will keep Ba out of the game for the best part of a year. 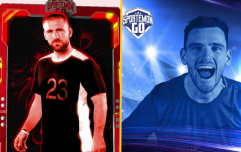 END_OF_DOCUMENT_TOKEN_TO_BE_REPLACED

Shaw was hugely grateful for the support he received after his injury, and has reached out to the former Chelsea striker, who is now plying his trade in the Chinese Super League.

"Obviously I've been through the same thing so I know how you're feeling right now," Shaw said in a video message.

"But I think the main thing for you now is to keep strong and...keep your family and friends close, because for me that was the most important thing at the time."

.@LukeShaw23 has a message of solidarity for @DembaBaFoot after the Shanghai Shenhua star's recent injury setback: https://t.co/lsAwMyoB55

END_OF_DOCUMENT_TOKEN_TO_BE_REPLACED

It's not the first time we've seen such a noble gesture from Shaw, who missed Euro 2016 after failing to recover from his injury in time.

Shaw thanked Manchester United fans for their support during his lay-off, and made his return in a friendly against Wigan just 24 hours before Ba's injury occurred.

An X-Ray has since been released of the Senegalese striker's leg, showing breaks to the tibia and fibula.

popular
Fears surging covid cases could ruin summer holidays with return of tests and rules
Brit on holiday beaten with a brick by gang before being thrown in the sea unconscious
Men with ‘very large penises’ wanted for new documentary
Dad who ran off with Ukrainian refugee says couple are doing 'brilliantly' - but he can't see his kids
Teens are turning up to watch Minions in suits - and why cinemas have been forced to ban them
British schoolboy breaks internet after attending prom in sequined tuxedo ballgown
Premier League player arrested on suspicion of rape facing two more allegations
You may also like
Sport
Wan-Bissaka and Shaw have a 'hell of a job' getting in Rangnick's team, claims Ferdinand
Sport
Luke Shaw admits Liverpool thrashing had 'been coming'
Sport
Luke Shaw played the Euros for England with broken ribs
News
England players singing 'Sweet Caroline' on holiday is a joy to behold
Sport
Luke Shaw's brilliantly humble response to praise from Roberto Carlos
Next Page