Luis Suarez has vowed never to attend a Fifa Gala again after how they treated him.

The Barcelona sharpshooter has confessed that he is still 'deeply hurt' over the suspension he was handed for biting Giorgio Chiellini in the 2014 Fifa World Cup. 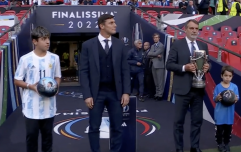 END_OF_DOCUMENT_TOKEN_TO_BE_REPLACED

Suarez who has previously served bans for biting during his Ajax and Liverpool days, was banned for nine matches and suspended from all football-related activities for four months over the incident.

It was the suspension that left a bitter taste in the Uruguayan's mouth, as he explained on Onda Cero radio on Thursday.

"You can punish someone, suspend them, but to stop them going to a training centre, for example, to see my nephew train, that seems so unfair to me. I didn't understand it. Not at all."

Shortly after being handed the punishment, Suarez made the switch from Anfield to Camp Nou for around €80 million, but the restrictions that Fifa had placed on him hindered his start at the new team, and that's something he'll never forget.

"Give me 10, 15, 20 games, but to treat me how they treated me hurt. And when I had the trials with FIFA's lawyers, giving their reasons, it was even worse. I am aware that I made a mistake but I am also aware I am a human being."