Liverpool missed their chance to move top of the Premier League after being held to a goalless draw by Manchester United at Anfield.

Philippe Coutinho came closest to breaking the deadlock, only to be denied by a brilliant David de Gea save, meaning José Mourinho took a point from his first trip to Anfield as United boss.

The game was low on excitement but there were still plenty of talking points from Anfield.

After Jurgen Klopp revealed in a recent interview that he liked his players to be like wild boys, it was inevitable that Duran Duran would be given an airing at Anfield, and so it transpired ahead of a game in which the participants rarely require any encouragement to show their wild side.

As it turned out this was not a night when Liverpool lived up to their manager's vision, it was one when their football lacked the intensity that he demands, never mind came close to matching the fury of their previous home performances against Leicester City and Hull City.

The first half was a case study in game management as United alternated between a low block and a high press, meaning Liverpool's attacks were strangled either at source or just before they began to look promising.

The space that Liverpool thrive in was not available and nor were the opportunities to charge forward at breakneck speed. Mourinho's tactical plan was not built around out-and-out defence as some had predicted, but it was predicated on territorial control and, for the first time this season, Liverpool found it difficult to create chances.


The hosts' half-time total of two shots was their joint lowest return in the first half of a home game since the 2003/04 campaign. Mourinho had subdued the wild boys.

END_OF_DOCUMENT_TOKEN_TO_BE_REPLACED

This, of course, is his speciality but it is one that has become increasingly unloved as the United manager has fallen out of fashion. That, though, says nothing about his ability as a manager. Preventing your opponents from playing as they would like, particularly when they are in form, may not be as attractive to the neutral as gegenpressing and furious counter attacking, but it remains a valuable means of getting results.

On this occasion, United stopped Liverpool from playing and in doing so averted a loss which would have put further pressure on their manager and added to the allure of his opposite number.

Pogba has finally found his niche

As a manager whose reputation was for signing players of little use or who did not fit his team's established way of playing, Graeme Souness is better placed than most to question the fee Manchester United paid for Paul Pogba and Jose Mourinho's use of him.

The former Liverpool manager then went a stage further, suggesting that the only way Mourinho would stand a chance of getting the best out of Pogba would be by moving him out of central midfield into a more advanced role. It was hardly a revolutionary point to make, particularly with Wayne Rooney no longer complicating the way that Mourinho sets up his team, but still it required a shift in the thinking of the United manager that he had been disinclined to take.


All of which made Mourinho's decision to deploy Pogba as a physical force number ten against Liverpool all the more intriguing. This was a new departure for United but it was immediately clear that it was one that both player and team would benefit from. With Marouane Fellaini and Ander Herrera behind, United finally had a midfield structure that combined tactical discipline and well directed industry.

END_OF_DOCUMENT_TOKEN_TO_BE_REPLACED

That alone made more sense of Pogba's role within the team and even though he was dispossessed more times than any other player during the first half it was never in an area in which losing the ball could damage his team.

Having been empowered to express himself without fear, Pogba established himself as the United player that Liverpool became most wary of.

Appearing in areas where defenders would rather not step out to, and where midfielders would prefer not to drop back to, Pogba's use of space is clearly more of an asset higher up the pitch and it was one that should have led to the opening goal as he worked his way out wide before delivering a searching cross that Ibrahimovic headed wastefully wide. That was unquestionably Pogba's most significant involvement and he will need to offer much more if he is to stand any chance of justifying his fee, but at least he now has a role that will give him the opportunity to do so.

Daniel Sturridge is no longer a natural fit

For so long, the dominant question about Daniel Sturridge was whether he was fit, but increasingly the concern for Liverpool is whether he does fit. The usual platitudes about his peerless finishing, his goals to games ratio and his undoubted ability will continue to be rolled out but this is not a team which is built around him and it does not appear to be one to which he is willing to bend his own talent for the benefit of others.

Granted, Sturridge was isolated for long spells as a result of United's tactics and Liverpool's uncharacteristic timidity, but the long established reality is that forwards in Klopp teams do not get to allow games to pass them by.


There was a time that when he was this subdued, Sturridge would justify his selection with a goal. But those occasions have become much less frequent since injury diminished his pace and Liverpool, through necessity, found ways of functioning without him. While his goals per minute ratio remains high, his actual goalscoring output has become surprisingly low; only 12 times in the last two-and-a-half years has Sturridge scored a league goal. Once again lacking in both intensity and incision, it was clear for some time before he was taken off that he would be withdrawn and in the event it took 59 minutes before Klopp's patience finally snapped. 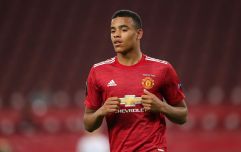 END_OF_DOCUMENT_TOKEN_TO_BE_REPLACED

What should trouble Sturridge most as he finds himself at odds with so much of what is happening around him is that Liverpool's attacking threat increased significantly after he had been replaced by Adam Lallana. Liverpool still remained some way short of their fluent best but they were finally able to at least discomfort United's well-drilled defence with increasingly intelligent movement and intricate interplay. Given this is how Klopp wants Liverpool to play, it is going to be up to Sturridge to prove that he can fit in with them because they are not going to change to fit in with him.

Daniel Sturridge and Eric Bailly compete for the ball, but no way through yet. pic.twitter.com/oX37uyH0e0

For a man at the centre of a storm not of his own making, unless the place where he chooses to live is in itself considered a controversial act, Anthony Taylor did not allow either the hullabaloo over his appointment nor the occasion to get to him. Considering he went into the game with Keith Hackett, the former referees supremo, warning that by selecting Taylor, Professional Game Match Officials Limited (PGMOL) had placed the safety of the referee and his family at risk, this was no small feat.

The sinister undertones of Hackett's claim need no further exploration, other than to say that they were totally without foundation. As it was, the most serious threat Taylor faced was to his eardrums as he was constantly bombarded with chants of “You Manc bastard” by those on the Kop who has fallen into line with the view that a referee who was born in Wythenshawe and who lives in Altrincham should not have been chosen to take charge of this fixture.

Regardless of the pressure he was under, Taylor's measured approach to the game was established immediately when a late challenge on James Milner by Marcus Rashford was treated exactly as it deserved – as a foul, a free kick and no more. There was no attempt to lay down the law early and make himself a hostage to fortune by setting a low standard for a booking, just a common sense piece of refereeing with the situation being judged on its merits. If there was a criticism, it was that at times Taylor was too understanding of some of the challenges that were being made. Under Mourinho's influence, United were quick to recognise Taylor's leniency and take advantage of it as they took it in turns to break up play. The 15 fouls they made during the first half was three more than their average in the seven league games they had played previously but it was only the last of them, made by Eric Bailly in the penultimate minute of the opening period, that was deemed worthy of a booking.

As the game petered out to the kind of low-action, uneventful goalless draw that meant none of the seemingly endless hype that preceded it was justified, Taylor was able to blow his whistle for the final time in the knowledge that the controversy had begun and ended with his appointment.