Liverpool have added depth to their attacking options with the signing of Xherdan Shaqiri from Stoke City on a five-year deal after activating his £13 million relegation release clause.

The Switzerland international interrupted his post-World Cup holiday in order to undertake a medical 0n Merseyside and finalise the terms of his transfer on Friday.

END_OF_DOCUMENT_TOKEN_TO_BE_REPLACED

Shaqiri can operate in an advanced role across midfield as well as in the front three, which will enhance Jurgen Klopp’s ability to rotate his forwards.

The 26-year-old’s dexterity from set-pieces and inventiveness in possession will add variety to an already explosive attacking force.

“I think the English phrase to explain the decision to sign Xherdan is a ‘no-brainer’. When someone like him becomes available in this way you have to react if you are smart – and we have,” Klopp told Liverpoolfc.com.

“He has speed and ability, has the right amount of arrogance on the football pitch, real bravery to want the ball and influence things. To play for us these are mandatory requirements. 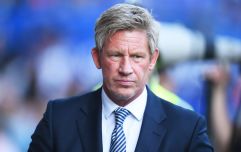 END_OF_DOCUMENT_TOKEN_TO_BE_REPLACED

“We are the perfect move for him in this moment as well I think, because he needs to push himself and challenge himself and our environment encourages that. We will want him to express himself but also learn and improve the areas of his game where he can still make progression.

“From our perspective, he is someone who makes a big difference to the squad and team, because he can fit in so many positions in our system. He gives us greater flexibility in how we can use our current players also. This is cool."

Shaqiri, who joins Fabinho and Naby Keita as Liverpool’s new recruits this summer, scored 15 goals and as many assists in 92 appearances for Stoke. END_OF_DOCUMENT_TOKEN_TO_BE_REPLACED

He was previously at Basel, before spending two-and-a-half seasons with Bayern Munich where Klopp was was an admirer of his creative attributes while at the Borussia Dortmund helm.

A transfer to Inter Milan followed in January 2015, but he quickly traded them for the Potters that August.

Shaqiri, who will wear the 23 shirt previously used by the departed Emre Can, was desperate to join the Reds in 2014 - a move blocked by Bayern - and was delighted to finally sign for the Anfield side.

"It’s a huge club with big history, big players and a fantastic coach. So I’m really glad and happy to be here.

“As a player you always want to be on the biggest stage in football. A few years ago I wanted to come too but it didn’t happen. I’m really happy that now I’m finally here. I want to improve myself too, I want to be with the best and I want to win titles. That’s what I’m here for."

popular
Mum in jail for murder pays tribute to son, 6, killed by his dad and new girlfriend
The JOE Friday Pub Quiz: Week 272
Chilling video shows moment step mum tried to get away with murdering boy, 6
Bride faints on groom, vomits and gets pooed on during ceremony
Man suing company after being 'hung upside down like meat' at Christmas party
Petition to stop interviewing Will and Jada Smith has hit 15,000 signatures
Horrifying footage shows cop fatally shoot man in wheelchair 9 times
You may also like
Sport
Jurgen Klopp riled by line of questioning in pre-match Everton interview
Sport
You have four minutes to do this tricky Everton and Liverpool quiz
Sport
Ian Rush believes pressure will 'crank up' on Rafa Benitez if Everton lose to Liverpool
Sport
Jurgen Klopp gives fiery response to comments on Merseyside derby
Sport
Liverpool legend Ray Kennedy dies aged 70
Next Page