We're not even ten days deep into January yet, and Liverpool have been an ever-present in the transfer gossip columns.

Despite splurging enough money on Van Dijk to make him the most expensive defender ever to have played football, the Coutinho deal means Liverpool actually have a net profit of around £70m so far this month - all the excuse needed for them to be linked with pretty much every player under the sun as they search for a replacement for the Brazilian.

Inevitably, talk of a move for AS Monaco's Thomas Lemar has resurfaced, after the French international was linked with a transfer to Anfield late in the summer window. 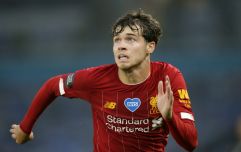 END_OF_DOCUMENT_TOKEN_TO_BE_REPLACED

Goretzka, whose deal at Schalke expires at the end of the season, is expected by many to sign for Bayern. However, reports from SFR Sport now say that Liverpool are looking to sign the midfielder. They also claim he is deemed as more of a priority than Lemar, although they do add that they may not necessarily be looking to add him to their squad this month.

Although they admit that the player is close to joining Bayern, they add that Klopp is doing everything within his powers to convince him to go to Anfield instead. If he does manage to persuade him, this will be quite a coup for the Liverpool boss.


popular
QUIZ: Can you name every top European football club that begins with 'L'?
The JOE Friday Pub Quiz: Week 210
Protestors and police officers injured at anti-lockdown protest
Manchester United score penalty after full time whistle in 3-2 win over Brighton
Netflix has just released a must watch Jose Mourinho documentary
QUIZ: Can you name these managers' first signings?
A definitive ranking of every swear word from worst to best