Little sympathy for controversial forward who's not happy about Fifa 18

The former Newcastle forward is currently lining out for Southend United in League One but he's seemingly been left out of the latest edition of the popular video game. 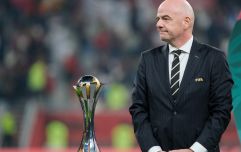 END_OF_DOCUMENT_TOKEN_TO_BE_REPLACED

Ranger recently served a prison sentence after admitting to an online banking fraud in which a woman lost in excess of £2,000.

The 26-year-old, whose career has been laden with off-field indiscretions, was released early for "his consistently excellent custodial behaviour" and he returned to the Shrimpers.

But Ranger was stunned to learn that his recent sentence saw him excluded from the Southend squad on Fifa 18 and he didn't hesitate to let EA Sports know about his disappointment.

So 2months in custody stops you from being on Fifa @EASPORTSFIFA 😵😵 wonder if I was @Cristiano or MESSSSI.. would this HAPPEN.. HMMMM

Given the polarising nature of the player, who used to represent England at U19 level, sympathy was hard to come by in the replies to the above post.

You were a premier league footballer and you pissed it away thinking your a gangster. And all your worried about it being on FIFA ?

Probably to avoid the costs to remove you from the game when you get yourself banged up again....

You're shite though so it doesn't matter.

You've got to be kidding, lucky to be in football at all. Get a grip #nufc

Your not a role model for our children #fact

I sold you for a tenna once on FIFA #nufc #wasteofspace

@Cristiano or messi didn't piss their career up the wall though did they plastic gangsta?Nice to try to compare yourself to those though ?