No series victory for the Lions but the current crop have ensured there will be a return to New Zealand in 2029. Long time to wait for this score to be settled.

The tourists were written off by just about every pundit, fan and former player after they were carted a 15-point beating in the opening Test at Eden Park.

END_OF_DOCUMENT_TOKEN_TO_BE_REPLACED

What followed was a superb show of heart, defiance and no end of skill. The series ended at 1-1 after honours were shared in the Third Test with an odd sensation of 'Oh.... oh... okay then'.

All either side dreamed of was winning the series and going down in history. Not as immortals, just the plain, old winners.

The trophy was lifted by captains Sam Warburton and Kieran Read with absolutely no-one getting carried away. Even hyperbolic Sky Sports didn't know what to make of it but they shouted about the draw regardless, slapped back and spoke of history.

Many players came of age as true, world-class stars on this tour. Sean O'Brien was immense. Tadhg Furlong never shirked. Maro Itoje showed what he is capable of and Warburton himself was redeemed.

Three others went above and beyond on countless occasions - Conor Murray, Toby Faletau and Elliott '50-metre penalty king' Daly. 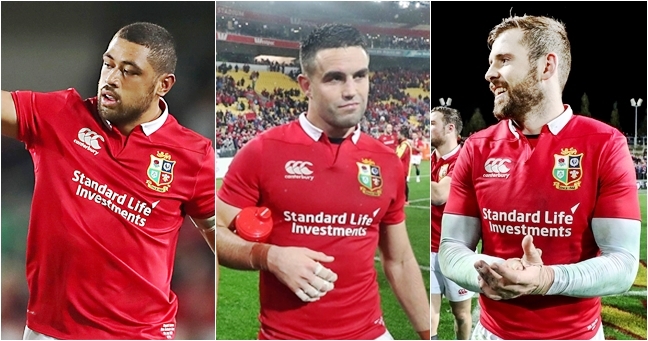 END_OF_DOCUMENT_TOKEN_TO_BE_REPLACED

One man stands head and shoulders above the rest. And those shoulders must be stinging after another night of sitting All Blacks down with crunching tackles.

Jonathan Davies has now started six Tests in a row and fronted up in the most marvellous way. For the second big match in a row, Davies was the exemplary Lion on display.

END_OF_DOCUMENT_TOKEN_TO_BE_REPLACED

He made eight big tackles, including two blockbusters on Jordie Barrett and a chase back that prevented an intercept try. Like Brian O'Driscoll had a habit of doing, some of his rushes out of the line were perfectly timed and reversed the momentum in blow after shuddering blow.

In terms of the Test Series, the Welsh centre was the Lions' best for clean breaks and offloads.

Toss in eight more carries, 29 extra metres and another line break and you get an idea of the attacking impact he had too.

Here's how we rated Davies in each of the three Test matches:

FIRST TEST: Great line break at the start nearly set up a Murray try. Involved in O'Brien try and punctured the Kiwis with a great second half break that nearly led to a Watson score. Missed a crucial tackle in the lead-up to the Ioane try when he shot out of the line. 8/10

SECOND TEST: Made one delicious out-the-back offload in the first half. Busy and effective. 8/10

THIRD TEST: What a warrior! Break-neck chase back to collar Lamaupe after Barrett's intercept. Massive defensive hit on Jordie Barrett after rushing out. Great carry early in the second second half helped win a penalty. 9/10

Typical of Davies' modesty, he dismissed Sky Sports' praise for his own contribution and chose instead to rave about his teammates.

He won't say how brilliantly he played himself so we'll leave that to an undoubted expert on the matter.

That'll do it for us.