Enjoy this compilation of each of Lionel Messi's goal this season

Lionel Messi is decent at football

Despite his height Lionel Messi has found himself a special little niche in the world football. That niche being the best player that has ever graced any football pitch ever.

Everyone has see Messi play - be it on television or in real life - and there aren't really many superlatives that you can use to describe him that haven't been used at length in the past.

He's just really fucking good at football - pretty much every game, and definitely every season - and last season was no different.

Thankfully, the good people at LaLiga have tweeted a video of each of his league goals, all for your enjoyment.

This will be the best one minute of your day. Stop what you're doing and watch. 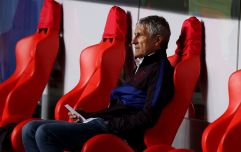 END_OF_DOCUMENT_TOKEN_TO_BE_REPLACED

In another celebration of this weird little genius, a Twitter account dedicated to the Argentine (one of about one million presumably) posted a video of highlights of Messi ruining cracking footballers from the season gone by.

The highlights shows him go by a host of top players including Gareth Bale, Dani Carvajal and Antoine Griezmann and quite frankly it is superb.

To be honest with you there's not much more to say other than that this is worth watching, so just go and watch it.