Liverpool defender Ki-Jana Hoever scored a fantastic goal for the Holland U17s during their 3-0 win over Belgium on Sunday.

Sontje Hansen and Anass Salah-Eddine opened the scoring for the Dutch and gave the Oranje a 2-0 lead heading into half-time before Hoever scored a third goal to kill the game off and put the Netherlands through to the semi-final where they will play the winner of today's other quarter-final between Hungary and Spain.


Hoever became Liverpool’s youngest-ever player in the FA Cup when the 16-year-old made his first-team debut as a sixth-minute substitute for Dejan Lovren in the third round tie at Wolves. 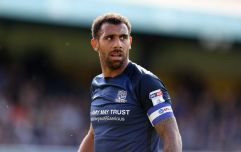 END_OF_DOCUMENT_TOKEN_TO_BE_REPLACED

“It is just a joy to watch him," Liverpool manager Jurgen Klopp said in January.

"He is an incredible, confident young fella and is really a good player on top of that. It's nice we can see him day in, day out. It's really cool.

“He is for sure for the future, but when the future starts I don't know. But he is in and he learns a lot and improves a lot, it will happen automatically.

“It's a nice prospect for the next months and years."


popular
Roy Keane is angry at everything bar his own tedious punditry
This is how much time most men need after orgasm before they're ready for another round
Who is the most handsome footballer in the Premier League?
THE JOE FRIDAY PUB QUIZ: WEEK 174
Liverpool are planning two victory parades for Premier League and Champions League
WATCH: Rick & Morty pull off a violent space heist in Run The Jewels' new 'Oh Mama' music video
Who would win a fight between all the football mascots?