Khabib Nurmagomedov made a somewhat unexpected appearance in the media tent after the chaotic finish to UFC 229.

Many assumed that Nurmagomedov and Conor McGregor would have been shepherded out of the T-Mobile Arena following the melee that marred the main event which is almost universally agreed to be the biggest fight in UFC history.

Nurmagomedov defended his lightweight title by submitting McGregor in the fourth round of their grudge match but it all kicked off in the moments that followed the Irishman's tap.

The undefeated Russian jumped out of the Octagon to confront McGregor's Jiu-Jitsu coach Dillon Danis, who boasted that he was a better grappler than Nurmagomedov in the build-up to Saturday night's fight, and it soon kicked off.

At least two members of Nurmagomedov's team physically assaulted McGregor in the cage but UFC President Dana White insists that McGregor has no interest in pressing charges against his assailants.

Given the chaotic nature of the post-fight exchanges, few reporters would have expected Nurmagomedov to show up for questions.

But show up he did and while he didn't stay long, 'The Eagle' did give his take on what went down. 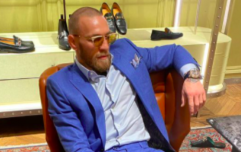 END_OF_DOCUMENT_TOKEN_TO_BE_REPLACED

"I told you that these guys - not only him [McGregor] - they're tap machines. When you put him the wrong way, he's going to tap. What happened today?

"They call him a two-time world champion in two weight classes but today he tapped."

Nurmagomedov went on to blame the media for encouraging tension between fighters when all he wants is a respectful lead-up with his opponents.

"I think it's the media. The media has changed MMA a little bit," he added.

"Thank you guys so much for waiting for me here. I know my father is going to smash me when I go home. Nevada, sorry!"