Expect more of the same next season.

Manchester United have moved fast in the transfer window, securing two transfers before the World Cup even begins. Jose Mourinho's side landed Fred earlier this week, signing the Brazilian midfielder from Shakhtar Donetsk midfielder for £52m. They followed that up with a deal for Diogo Dalot from Porto. The 19-year-old can play either as a right-back or a left-back. According to Mourinho, "In his age group, he is the best full-back in Europe." 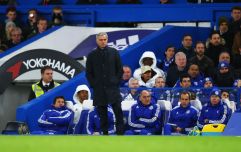 END_OF_DOCUMENT_TOKEN_TO_BE_REPLACED

Both players appear to be welcome additions to the United squad - especially Fred, who looks certain to slot into midfield alongside Nemanja Matic and Paul Pogba. However, United's transfers may become more underwhelming as the window progresses, if reports are to be believed. According to Miguel Delaney, writing in The Independent, Mourinho's main priority for the rest of the transfer window is to secure a back-up for Romelu Lukaku.

The United manager has Marcus Rashford and Anthony Martial, both of whom can play through the middle, but is reportedly interested in signing a more "like-for-like" option for Lukaku, someone who can offer the same "physicality" as the Belgian striker. Mourinho is said to have been looking at Marko Arnautovic, who impressed for West Ham last season, and Juventus forward Mario Mandzukic.

According to the report, Mourinho is prepared to use a significant proportion of his summer transfer budget to land a physical forward who can act as back-up for Lukaku, and could possibly put-off signing players in other positions, such as a new left-back. So, Luke Shaw's time at Old Trafford may not be over just yet.

He bemoaned Lukaku's absence from games at the end of last season, including the FA Cup final defeat to Chelsea, and evidently sees a physical target-man leading the line as an essential component of his team.

Rather than adapting his approach, Mourinho may be doubling down in an effort to topple Manchester City, and the spectacle is unlikely to improve.