It's silly season in the transfer window

Jose Mourinho has given the green light for Tottenham to approach Crystal Palace to sign out of favour striker Christian Benteke, according to Footy Insider.

Mourinho is understood to been a keen admirer of the Belgian and reportedly tried to sign him during his time at Manchester United.

Benteke has fallen out of favour at Crystal Palace over the past couple of years after his form took a nosedive following a prolific debut season at Selhurst Park.

After scoring 17 goals in all competitions in the 2016/17 season, injuries took their toll and saw him rack up a total of just five goals in the following three seasons.

But apparently that has not deterred Tottenham from pursuing him, as Palace look to offload him to reduce their wage bill.


Spurs have wanted to sign a back up striker to Harry Kane for some time, with recent attempts at filling that hole in the squad having varied results in the form of Vincent Janssen and Fernando Llorente. 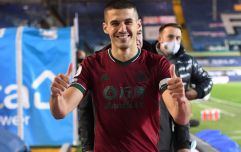 END_OF_DOCUMENT_TOKEN_TO_BE_REPLACED

With various offers for Benteke from other clubs falling through and Spurs' search for a plan B proving fruitless, this move could well happen purely out of both clubs' desperation.

Spurs almost signed Alexander Sørloth earlier in the window before the Norwegian striker joined RB Leipzig from Palace, with half the money going to Trabzonspor, where he scored 33 goals in all competitions last season.

Benteke would reportedly cost £15 million and presumably have to take a pay cut, as the 29-year-old currently earns north of £100,000 at Selhurst Park.

It's worth noting that this is probably unlikely to happen, but with so little time remaining in the window and clubs increasingly desperate to resolve issues within their squad, don't be surprised to see some weird transfers happen.