The SBG head coach's entrance was met with a mixture of laughter and applause. Walking out wearing Robin Black's 80s Glam Metal vest was appreciated by the intimate crowd. After that first joke landed, Kavanagh kept coming with the zingers and bits, as if he drew inspiration from the Canadian MMA analyst's stand-up comedy-esque show that preceded the Q&A.

In between the knee-slappers and sips from a bottle of beer, the Dubliner frequently dropped uninhibited knowledge.

This opinion, that could be construed as a bit of a hot take in the martial arts community, blew Black's mind.

"We had an Irish breakfast, we had Guinness, it's all been wonderful. But, just that little tidbit, that's going to be what I dig Ireland for."

END_OF_DOCUMENT_TOKEN_TO_BE_REPLACED

"Nate Diaz is my favourite fight, by the way. If I could pick a fight for the next one it would be that trilogy. I realise it's not the fan-favourite. The fan-favourite without a close second is the Khabib fight. But for me, it's the Nate Diaz rematch."

"He had already lost to him, it's a bigger guy, Conor's skill-set is shutting people's consciousness off and he's impossible - a freaking Homer Simpson head, he just keeps moving forward. I've seen Conor fight a lot of people that he's able to walk through and that's great, it's fine. It doesn't really excite me that much, to be honest. But that fight..." 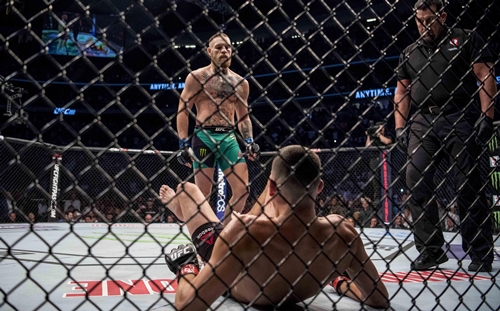 END_OF_DOCUMENT_TOKEN_TO_BE_REPLACED

Being beaten to the ground and submitted at UFC 196 by the Stockton native, who was filmed doing shots on a yacht in Cabo just a few days before stepping in as a short notice replacement, didn't dishearten McGregor. Even in the immediate aftermath, 'the Notorious' was obsessed with exacting revenge.

"By the time he got backstage (at UFC 196), he had a stream of it and we were watching it. The next morning, not off the phone until both Lorenzo (Fertitta) and Dana (White) said that would be your next fight. And I'm looking at him and going, 'Take an easier fight. (Laughs) We'll make up a story and go back to 155. The motherfucker, you hit him everything, he kept walking forward.' It really reminded me of Rocky II when your man was trying to talk Apollo Creed out of the rematch.

"He pursued it and he chased it and I could only say at the end of it, 'You're a brave motherfucker, because I would do anything to avoid that fight.'"

McGregor, of course, got his hand raised at UFC 202. After cracking the 'Homer Simpson head' for the first two rounds, he battled through the fatigue and the Diaz resurgence to take a majority decision. The photo from that fight that can be seen in SBG holds a very special place n Kavanagh's heart.

"There's a photo in my gym and it may be my favourite photo in MMA. I'd almost say life. Just the look on his face and the work he put in and the positive result at the end of it all... that's my favourite fight of all time."