Joey Barton has been named head coach of Fleetwood Town

Joey Barton has been named the head coach of League One side Fleetwood Town.

Barton will take charge of the club on June 2, and it will be the 35-year-old's first managerial post. The former Manchester City midfielder last played professionally for Burnley in the Premier League last season. However, he received a ban for a charge related to betting on matches. 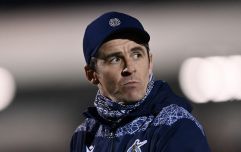 END_OF_DOCUMENT_TOKEN_TO_BE_REPLACED

His suspension will expire in June, but Barton will make his first step into management, rather than return to playing professionally. He will replace current Fleetwood boss John Sheridan, who took the role after Uwe Rosler left the club in February.

In a statement on Fleetwood's official website, Barton said:

“I’m very excited by the challenge and the project at Fleetwood Town. It’s a club I’ve known for a long time, and a chairman I already have a very good relationship with. My first job in management was always going to be a big decision for me and I’m delighted with the opportunity ahead, I’m joining a club with big ambitions. I’m looking forward to getting started on June 2nd."

Fleetwood are currently 14th in League One.

✍️ | Fleetwood Town can confirm an agreement has been reached for @Joey7Barton to become the club's new Head Coach as of June 2nd.