Joe Rogan's been feeling rather apologetic as of late.

The UFC commentator has made his third public apology in a fortnight after he first took responsibility for a joke made on his podcast insinuating that female fighter Cris 'Cyborg' Justino had a penis and, on Sunday, Rogan apologised to Jose Aldo for the confusion caused in his post-fight interview due to some inaccurate translation.

The latest has also been issued to former UFC featherweight champion Aldo due to some comments made by Rogan on his podcast earlier this week.

Rogan continued discussing Aldo's physique, and the difference between how he looked on Saturday night and earlier in his career, with former UFC heavyweight Brendan Schaub on Monday's episode of The Joe Rogan Experience.

And on Thursday, Rogan came out with a lengthy apology for his comments, claiming that he was mistaken in judging the physique of Jose Aldo against a random image of the Brazilian from the past. 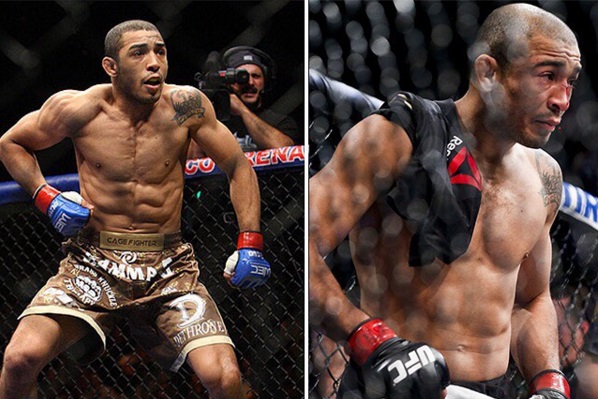 Here is the apology in full that came via Rogan's Facebook.

"There was an audio "leak" from inside the UFC production truck right before Saturday night's fight where I said that Jose Aldo's body looked smooth and deflated, and that I didn't want to jump to any conclusions and that it could have just been from doing a lot of cardio. I also said he looked nervous. Needless to say this caused a lot of controversy.
Since then people have posted photos of Aldo recently as well as from this fight, and he looked very similar.
So for that, I stand corrected. My apologies for being wrong to Aldo and his trainer Andre Pederneiras. I have nothing but admiration and respect for both of them.

This wasn't supposed to be a public conversation, I was just talking to my friend the producer in the truck privately.
As you can see from this photo from earlier in his career his body looked different from how he looked Saturday night. There are several possible reasons for that, one of them being that the 1st photo is him moving, and another that he had endurance problems in the later rounds of his fights and might have leaned out.

Another thing some were upset with was that I didn't want an immediate rematch, and that I thought Conor should fight Frankie Edgar. My reasons for this are that I think Frankie stylistically is a great match up for Conor. I also think that when someone suffers a brutal knockout they should take a lot of time off to recover. I'm not a promoter, and I don't get to decide who fights who or when, and for that I'm grateful. What I am though, is someone who respects and cares very deeply for fighters and their health. Too many times I've seen fighters come back too soon from being KO'ed and watch them not be able to absorb punishment anymore.

Aldo is on my short list of all time favorite fighters, along with Wanderlei Silva, Anderson Silva, GSP, Mighty Mouse, and Fedor.
I would love to see Aldo back motivated for revenge and gunning to regain his title. First though, I'd like to see him rest and recover.
Again, my apologies to Jose Aldo and Andre Pederneiras and anyone else I offended with my opinions."


popular
Buying your first house is about to get even more difficult
Manchester United agree terms with Inter Milan for Alexis Sanchez transfer
It was Pierre-Emerick Aubameyang's final but Emiliano Martinez's moment
A must-see Jurgen Klopp documentary on Channel 4 this evening
QUIZ: Can you identify the correct spelling of these brand names?
A definitive ranking of every swear word from worst to best
QUIZ: How much are these meals under the Eat Out To Help Out scheme?