It was handbags after the final whistle at Molineux

Jesse Lingard has revealed what exactly it was that got Pedro Neto so annoyed after West Ham beat Wolves on Monday night.

After West Ham beat the West Midlands side 3-2 in a thriller, there was a coming together between the two players, resulting in the two having to be separated by teammates.

Speaking after the game to Sky Sports, Lingard revealed that it was the Hammers' game management tactics that had wound up the Portuguese forward. 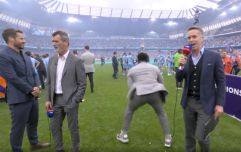 END_OF_DOCUMENT_TOKEN_TO_BE_REPLACED

Lingard told the cameras: "He said 'why do you play like that?' I don't know what he meant by that.

"Of course we won the game, I think he meant when we kept it in the corner.

"But that's game management and it's things like that that we have to learn and keep picking up on."

Jesse Lingard reveals what was said between himself and Pedro Neto at full-time pic.twitter.com/HxJsGx9zUr 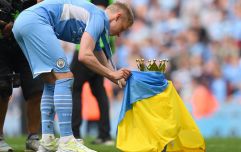 END_OF_DOCUMENT_TOKEN_TO_BE_REPLACED

Messi Lingard was the talking point of the game yet again for all the right reasons though.

Scoring a stunning solo goal six minutes in, before setting up Jarrod Bowen for the third, the 28-year-old has now scored six goals and assisted another three since joining West Ham on loan from Manchester United.

His impact on the side is one of the reason why the Hammers sit in the top four with just eight games to go.

On this type of form, it is difficult to see how England manager Gareth Southgate can leave him out of the squad for the upcoming European Championships. Love him or hate him, JLingz is the man of the moment currently, and we may be seeing much more of him over the coming months.

Maybe even a rematch with Neto and some of his Wolves teammates if England come up against Portugal...