Jamie Redknapp nails it with his analysis of Southampton's Shane Long

Jamie Redknapp played with some top forwards in his day. He also shared the pitch with some... triers.

For every Robbie Fowler, Wayne Rooney and Michael Owen the midfielder played with, there was Brett Ormerod, Dexter Blackstock, Hélder Postiga and Titi Camara. Honest pros but names that would hardly strike fear into opposition defences.

END_OF_DOCUMENT_TOKEN_TO_BE_REPLACED

Redknapp is 12 seasons retired and has been working as a pundit ever since. He's getting there.

In fairness, Redknapp does not shy away when an opinion is sought. He doesn't always get his calls right but he's out there, week on week, calling away.

Looking ahead to Southampton's away date with struggling Crystal Palace, Redknapp was asked about Republic of Ireland striker Shane Long being called in to replace Marco Gabiaddini. His response was dripping with condescension but, looking at Long's career to date, it is hard to argue with much of what the former England midfielder had to say. 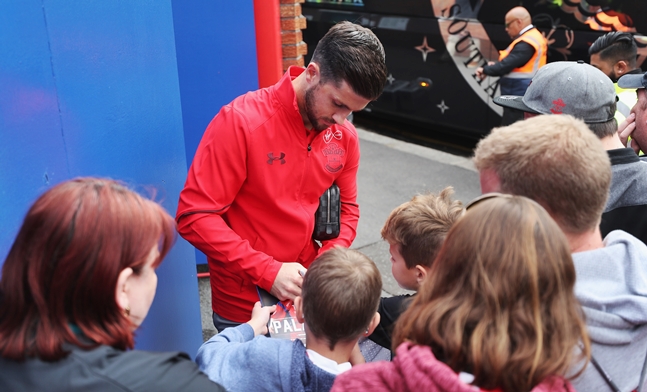 "I wouldn't say he's a natural goalscorer but with Gabiaddini, who has been the main man for Southampton, the goals have obviously dried up for him. I imagine when the team-sheets came through, Scott Dann and Timothy Fosu Mensah - the Palace central back - thought, 'Hmmm, that gives us a bit of a different problem'. He will run in behind. He chases balls, chases lost causes. Not necessarily technically the best but he will chase everything. As a defender that's the last thing you'd want. You'd rather have someone like Gabiaddini who gets the ball in to his feet. Yes, he comes alive in the box but this guy chases things. And you're going to find yourself running back to your own goal a lot.

"As a midfield player, you know you can just hook the ball in and he will chase it. He makes bad balls look good. Is he the answer from a goalscoring point of view? Maybe not but he'll give you great energy up there and I think that's probably what Southampton are missing at the moment."

END_OF_DOCUMENT_TOKEN_TO_BE_REPLACED

Redknapp's analysis might seem condescending, but then you look at the numbers - three goals in his last 37 Premier League games for Long and none since February 11th - and one can't but see where Redknapp is coming from. Anyone who watched Long in action in the recent World Cup qualifiers would be inclined to second the pundit's analysis.

Long, though, is a player that gives his best returns when he gets a run of games. Finding the net in a league game, soon, would surely help his cause.

popular
Men with ‘very large penises’ wanted for new documentary
Brit on holiday beaten with a brick by gang before being thrown in the sea unconscious
Towie’s Yazmin Oukhellou and Jake McLean had ‘furious row in Turkish club’ minutes before horror crash, report claims
Premier League player arrested on suspicion of rape facing two more allegations
British schoolboy breaks internet after attending prom in sequined tuxedo ballgown
Teens are turning up to watch Minions in suits - and why cinemas have been forced to ban them
July 4 shooter: Chicago suspect fled the scene in women’s clothes and planned attack for weeks, police say
You may also like
News
Premier League player arrested on suspicion of rape
Sport
Dale Stephens claims he found out he had been released this summer through Twitter
Sport
Safe standing areas can be introduced in Premier League from 2022/23 season
Sport
Premier League going ahead with NFT collection despite collapse in market
Sport
Mike Dean comes out of retirement to become Premier League VAR official
Next Page