Another stunning free-kick from James Ward-Prowse saw Southampton snatch a late win against Tottenham on Saturday afternoon at St Mary's. 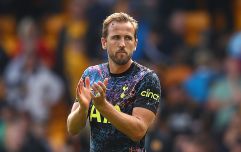 Harry Kane announces he will stay at Tottenham 'this summer'

END_OF_DOCUMENT_TOKEN_TO_BE_REPLACED

Ralph Hasenhüttl's side had fallen behind to Harry Kane's opener midway through the first half, but got back on level terms thanks to Yan Valery's equaliser with 15 minutes remaining.

Then, with little under ten minutes of normal time to play, Ward-Prowse produced another perfect set-piece to claim all three points for the south coast side.

The 24-year-old had equalised with a similar set-piece away to Manchester United a week ago, only for Romelu Lukaku to score a late winner for Ole Gunnar Solskjaer's side.

The result means Tottenham, who dominated the first half, have dropped points in each of their last four Premier League games, the 1-1 draw in the north London derby the only one of those matches in which they've avoided defeat.

Mauricio Pochettino's side, who were being talked up as potential title contenders just over a month ago, might now face a battle to finish in the top four. Should Manchester United beat Arsenal on Sunday, they will move level on points with Spurs.

Southampton's win moves them on to 30 points, two clear of the relegation zone.

popular
The JOE Friday Pub Quiz: Week 261
Missing influencer Gabby Petito's fiancé is now also missing
Supermarket worker calls out manager as 'pervert' over PA system then quits on spot
Shipwrecked mum found dead saved her children by breastfeeding them at sea
'Gleeking' is the 'disgusting' bodily function that most people don't know they can do
Man has hand ‘chopped off at the wrist in London after vigilantes corner him’
Pep Guardiola's defence of his tone deaf comments is a bizarre hill to die on
You may also like
Sport
Premier League 2021 transfer window: Winners and losers (so far)
Sport
Man City to offer 'player-plus-cash transfer for Harry Kane'
Sport
Bukayo Saka receives huge support from Tottenham fans in pre-season friendly
Sport
Harry Kane releases statement after fan criticism for "refusing to train"
Sport
Gary Neville issues warning to Harry Kane over missing Spurs training
Next Page