James Milner has had anything but a boring 24 hours.

It was only yesterday that the Liverpool midfielder was rumoured to be considering calling time on his international career, after he expressed his desire to be more than just a "good tourist" at tournaments.

But Milner's playing time certainly won't be an issue tomorrow, as he's been named as England captain for the first time in the friendly against the Netherlands at Wembley.

Milner: "To get the chance to lead out your country is a massive honour and something you'll never forget." #england 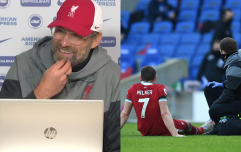 Jurgen Klopp says five subs are needed, but not for tactical reasons

END_OF_DOCUMENT_TOKEN_TO_BE_REPLACED

In the absence of the injured Wayne Rooney, Gary Cahill wore the armband in the memorable 3-2 victory over Germany on Saturday night. But Roy Hodgson will allow Milner to lead out what is expected to be a much-changed lineup on Tuesday, and he'll hope the 30-year-old, who has 57 caps to his name, can inspire England to another impressive win.