The Championship club claims that James McClean has been dealt with after an investigation was conducted into their winger's Instagram post relating to the abuse he faced from supporters at the end of Stoke's 0-0 draw with Middlesbrough last weekend. 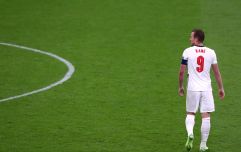 END_OF_DOCUMENT_TOKEN_TO_BE_REPLACED

McClean, who took to the pitch without a poppy on his jersey as he has done for several years, was subjected to jeers at the full-time whistle before some fans threw objects in the 29-year-old's direction as he attempted to make his way down the tunnel at the bet365 Stadium.

The Republic of Ireland international branded the offending fans"uneducated cavemen in the left corner of the Boothen End who sing their anti-Irish song every game" in an Instagram statement which resulted in a Stoke investigation.

On Friday, the club stated: "Stoke City's investigation into James McClean’s social media post following last Saturday’s game against Middlesbrough has concluded and the player has been dealt with under the terms of the club’s disciplinary procedure."

McClean later apologised to any Potters fans offended ahead of this weekend's trip to Nottingham Forest.

"At last Saturday’s game a section of our supporters threatened and abused me because of my religious beliefs and upbringing," McClean said in a statement on Stoke City's website.

The player has been dealt with under the terms of the Club's disciplinary procedure.

McClean has issued a statement to fans.

END_OF_DOCUMENT_TOKEN_TO_BE_REPLACED

"I am certain that no fair-minded person would regard that as acceptable but I recognise that as a professional footballer, and therefore a role model, I’m expected to tolerate it.

"Whilst, I do not believe it is appropriate for me to apologise to those fans who abused me, I do want to whole-heartedly apologise to the vast majority of Stoke City fans who although they may have different views to myself are decent and respectful.

"I sincerely apologise for any offence that I caused them with my comments and posting on Instagram."

popular
Scotland fans help with clean-up in Leicester Square as Tartan Army leaves London
The JOE Friday Pub Quiz: Week 248
700-pound George Floyd statue unveiled in US
Southgate explains why he didn't move Coke bottles like Ronaldo
Crystal Palace footballer is one of four British women suing Pornhub
'I made Tommy Robinson go viral, will you forgive me?'
Fans react to another disappointing Harry Kane display
You may also like
Sport
Christian Eriksen sends message to fans after hospital discharge
Sport
QUIZ: Can you remember the starting XIs for England vs Scotland at Euro 96?
Sport
UEFA threatens to move Euro 2020 final to Hungary from Wembley
News
Denmark and Belgium pause game at 10th minute for Christian Eriksen tribute
Sport
Russian manager goes against Ronaldo and drinks bottle of Coke at press conference
Next Page