James McClean may not be everyone's cup of tea but no-one can doubt that he gives it his absolute all for club and country.

McClean's combative nature, political stance, position on not wearing poppies on his jersey and the fact that he is never short of an opinion have all led to him copping a lot of abuse in away grounds. 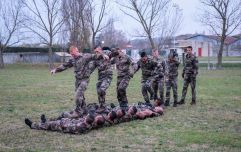 END_OF_DOCUMENT_TOKEN_TO_BE_REPLACED

Ahead of West Brom's game with Leicester City on Saturday, the Republic of Ireland and Baggies winger sat down with the BBC for a frank, honest interview on his life on and off the pitch.

During the interview, McClean dismissed the notion that he is a dirty player and claimed he is merely driven to give his all to get the three points for his team.

When asked about the flak he takes for expressing political opinions, McClean revealed that he had received death threats in the past.

Following the Football Focus interview, there was a resounding wave of support for McClean:

Interesting interview of James McClean...nobody should have to get death threats nobody. It's only a game of football at the end of the day

Great interview with James McClean. A proud son of Derry & a gentleman. His integrity & honesty shone through. #FootballFocus

He changed the minds of several people:

I know opinions on James McClean will divide many, but really impressed with his interview on Football Focus today.

@BBCMOTD @BBCSport that James McClean interview was the best one all season - love or hate him, a great interview!

But there will always be those that simply want to hate him:

Everyone has their own beliefs but James McClean needs to take his back to Ireland.

You can't please everyone.

popular
McDonald's launching new Big Mac with twist for first time ever in UK
Brewdog to sue BBC over allegations made in new documentary
Luke Shaw's old tweet about Man Utd teammate Ronaldo resurfaces on social media
Hero Jordan Henderson tries to prevent Liverpool fan from taking shirt off child
Evan Rachel Wood claims Marilyn Manson ‘essentially raped her’ in music video
Everything we know about new 'stealth Omicron' strain
Woman stabbed to death before knifeman run over and killed as driver ‘tries to save her’
You may also like
Sport
Roy Keane wary of 'Klopp coming after me' following Liverpool comments
Sport
Premier League clubs to consider legal action if postponement rules change
Sport
Premier League footballer arrested on suspicion of child sex offences has bail extended
Sport
Premier League to consider changing rules on covid postponements
Sport
QUIZ: How many of the most successful football teams can you name, without making a mistake?
Next Page