When in doubt, get on Craigslist.

UFC middleweight contender Ronaldo 'Jacare' Souza had become so frustrated with the lack of progress in terms of getting a fight booked that he took drastic measures.

Gilberto Faria, Souza’s manager, made the unprecedented decision to create a draft of an ad on Craigslist, the online classifieds database, calling for all willing 185lbers to accept a fight with his client.

END_OF_DOCUMENT_TOKEN_TO_BE_REPLACED

Souza hasn't fought since last May and saw his scheduled rematch with fellow contender Luke Rockhold cancelled in November after the American was forced out of the bout with an injury.

So it's understandable that the Brazilian Jiu-Jitsu black belt is getting antsy, but his manager's experiment seems to have worked a treat as, less than 24 hours after the Instagram post, 'Jacare' got himself a match-up.

END_OF_DOCUMENT_TOKEN_TO_BE_REPLACED

Newsday first reported that Souza is set to take on fourteenth-ranked Tim Boetsch at UFC 208, the Brooklyn event which will be headlined by a title fight for the inaugural UFC women's featherweight belt between Holly Holm and Germaine De Randamie. 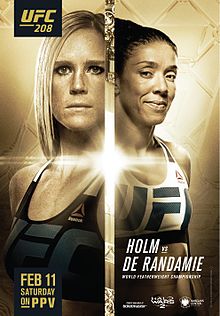 The card is slated for February 11, which makes the middleweight clash a rather late addition.

Boetsch is coming off the back of consecutive victories, with knockouts of Rafael Natal and Josh Samman in 2016 while Souza has won nine of his last ten fights.