There's a certain type of football fan who's always keenly on the alert for any perceived media bias against their team.

Now usually their accusations just get dismissed as verging on the comical. But every now and then the mask slips and a the vast, orchestrated media conspiracy against their team is unveiled.

That seems to have been the case last night when Match of the Day 2 host Mark Chapman introduced the highlights from Arsenal's last minute victory against Burnley.

On first hearing it sounds simply like he simply says:

"We start at the Emirates, Arsenal with one of the best home records in the league".

But then listen again:

I know you're a United fan, but try and keep it neutral mate @markchapman. #motd2 pic.twitter.com/FC6ViF9YyV

Now Chapman has never hidden the fact he's a Manchester United fan and has even given interviews to fanzines to flagrantly flaunt his love of the Old Trafford outfit. 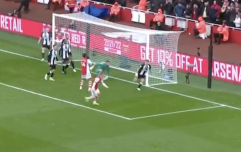 END_OF_DOCUMENT_TOKEN_TO_BE_REPLACED

But is this the smoking gun every Gunners fan been waiting for? Proof that there is in fact a huge Manchester United-led infiltration of the BBC (and who knows maybe every other media outlet in the country/globe) with the sole aim of doing down Arsene's hardy band?

Surely this is just the tip of the iceberg and the whole corrupt anti-Arsenal media edifice will now come crashing down.