Reminiscent to some of the best

Few fighters go from debut to UFC gold as quickly as Conor McGregor, but Israel Adesanya bettered McGregor's ascent in some style last weekend when 'The Last Stylebender' became the UFC's interim middleweight champion after an epic war with Kelvin Gastelum in the co-main event of UFC 236.

It took McGregor 796 days to become an interim champion in the UFC while Adesanya managed the feat in just 426 days.

Adesanya remains one of just two undefeated fighters to currently hold a UFC belt and he is set for a monster 185lbs unification showdown with Robert Whittaker Down Under.

Adesanya's meteoric rise has not gone unappreciated by the higher-ups and UFC President Dana White did not hold back with his praise of the Nigeria-born, New Zealand-based striking sensation.

"My career wouldn't be where it is without you!"

"I hope this makes up for all the times I've been late!"

After defeating Kelvin Gastelum to wrap UFC gold around his waist...

Israel Adesanya shares his moment with his long-time coach! 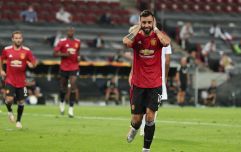 END_OF_DOCUMENT_TOKEN_TO_BE_REPLACED

"You know who he reminds me of? Conor McGregor," White said of Adesanya. "That’s what Conor did. Conor came in, he stayed active, he built up a lot of notoriety, had some great fights and people knew his name and people wanted to see him fight."

"Israel Adesanya is on the same trajectory right now," he added. "He’s doing the same exact thing Conor did. And you know what Israel doesn’t say when we call him? He doesn’t say no. ‘I’m on vacation, I’m not gonna show up to fight for a belt, and then possibly get a shot at the champion and make pay-per-view money'. He says ‘Yeah, I’ll see you in Atlanta'.

"And when you have that type of confidence in yourself, it pays off. It’s definitely going to pay off for him."


popular
Fantasy Premier League champion stripped of title in 'breach of terms' controversy
Ben Shapiro reading Cardi B lyrics is the most awkward thing you'll see today
QUIZ: How well do you remember The Inbetweeners?
This is what the future of airline travel could look like in a post-pandemic world
Celtic and Aberdeen matches expected to be called off after Covid-19 breaches
Everything the UK's fittest man eats to stay lean while building muscle
QUIZ: Can you name the Netflix show from a single screen shot?