Harry Kane better get used to his form being placed under the microscope.

When you're as talented as Kane, any hint of a goalscoring dry patch is going to be scrutinised by pundits.

Kane might have two goals to his name this season but he has failed to find the net in either of his last two outings and it's been suggested that the centre-forward could do with a rest after a hectic summer in Russia.

It's been pointed out that Kane has lacked sharpness in recent games and Arsenal legend Ian Wright has come up with an interesting theory for the striker's slow start to the season.

"There are also worries about Harry Kane’s fitness - but we need to cut him some slack," Wright wrote in his Sun column. "When you watch him, he does not look as sharp as we have seen him before.

"But people don’t take into consideration the fact he has just had a new baby.

Our beautiful addition to the family! Vivienne Jane Kane. 😍 So proud of @kategoodersxx for having the most amazing water birth with no pain relief at all. 💖💖💖 #mygirls #hypnobirthing


"How many other players coming back from the World Cup have recently had a new addition to the family? 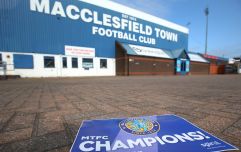 Macclesfield Town stadium for sale for less than a London house

END_OF_DOCUMENT_TOKEN_TO_BE_REPLACED

"We don’t know what his sleeping patterns are like at the moment so maybe that might have something to do with his form.

"But just like his Tottenham team, Kane can prove everything is all right by putting on a show at the San Siro."

Kane's fiancee Kate Goodland gave birth to a daughter last month and Wright reckons the stresses of being a new dad might be taking their toll on the Spurs talisman's performances.

Mauricio Pochettino has played down concerns over Kane's fitness and has described the 25-year-old as an "easy target."

"I'm not concerned. The reason is not tired or not tired, run or can't run, rest or no rest," Pochettino said ahead of Spurs' Champions League opener against Inter Milan.

"The moment of the team is not the best, it's a collective problem, not only one player. Different reasons why we're not winning the last few games."