It is a common suggestion from people

Every time the Women's World Cup rolled around, Hope Solo gritted her teeth and endured it. Now that the former USA goalkeeper has retired, she is on the offensive.

END_OF_DOCUMENT_TOKEN_TO_BE_REPLACED

Due to the size differences between male and female players, generally speaking, it has long been contested by some that women's goals should be reduced in size.

Looking, for example, at 2019 World Cup hosts France, their goalkeepers are all below 6-foot. Sarah Bouhaddi, who started the 4-0 tournament-opening win over Korea on Friday, is 5 foot 9 while her deputies Pauline Peyraud-Magnin (5 foot 8) and Solène Durand (5 foot 7) are both smaller.

Compare that with the French men's squad that won the 2018 World Cup and you had starting goalkeeper Hugo Lloris (6 foot 2) deputised by Alphonse Areola (6- foot 7) and Steve Mandanda (6 foot 1).

The @FIFAWWC kicks off today! Who are the players you should be looking out for?

Here are the top picks from @AlexScott and @JimJam1981 🏆 pic.twitter.com/HwgtcXJawn

Ahead of the Women's World Cup, Chelsea boss Emma Hayes spoke about 'physical differences' between male and female footballers, and suggested the goals could be reduced in size.

"There is often a criticism about goal keeping in the women’s game, I would argue that the goal is just a little bit too big. If it was built around our physical differences then we would be talking about great goalkeepers as opposed to exposing them," she said.

Were footballing authorities to reduce the size of goals in women's football, fans would have been denied a couple of fine finishes from that France vs. Korea game. This well-placed header from the excellent Wendie Renard:

What a 45 minutes from the hosts.

Don't miss the second half of #FRA v #KOR on @BBCOne

And this peach of a shot from French captain Amandine Henry:

Amandine Henry curls in an absolute beauty for France. 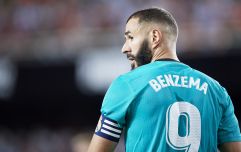 WATCH: Karim Benzema's best bits of the season so far

END_OF_DOCUMENT_TOKEN_TO_BE_REPLACED

The question of reducing goal sizes was put to 202-times capped USA goalkeeper Hope Solo and she had a strong reaction. On The Football Show 24/7, Solo commented:

"I take great offence to that question to be quite honest with you. We have this debate every four years and every tournament, especially in the World Cup," she said.

"I think it’s sexist to be quite honest, I think it’s infuriating and I take great offence to that."

'The women’s game the goalkeeping is not as strong as the men' in terms of coaching and analysis," she added.