Harvey Elliott posts Instagram update after being stretchered off

Liverpool midfielder Harvey Elliott has thanked fans for their messages of support after he was stretchered off with a suspected broken leg during the Premier League game with Leeds on Sunday afternoon.

END_OF_DOCUMENT_TOKEN_TO_BE_REPLACED

Jurgen Klopp was poised to replace the teenager with Jordan Henderson when he was grounded by a challenge from Pascal Struijk on the halfway line.

The reaction of Mo Salah, who was the closest player to Elliott at the time, made it clear the teenager needed urgent attention, with the medical team rushing on to immediately treat him.

Although the challenge from Struijk didn't appear malicious, the Leeds player received a red card as Elliott received treatment on the pitch.

Elliot received oxygen as he was carried away from view on a stretcher, but did briefly acknowledge the crowd with a short applause. 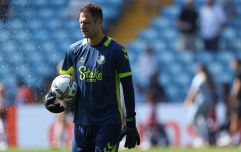 END_OF_DOCUMENT_TOKEN_TO_BE_REPLACED

Minutes later, he was able to send a quick post to his Instagram Stories. Reportedly taken from the back of an ambulance, Elliott can be seen giving the thumbs up in the image.

'Thank you for the messages guys,' the accompanying message reads. 'Road to recovery.'

Manchester United forward Marcus Rashford was amongst those to wish Elliott well in the minutes after his injury. 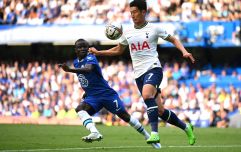 END_OF_DOCUMENT_TOKEN_TO_BE_REPLACED

'Ahhhh man rivalry aside that looks really nasty, no one wants to see that, thoughts are with you Harvey,' the Manchester United forward's tweet read.

Speaking later, Klopp confirmed that Elliott would be out for a long time.

“It’s a bad injury," Klopp said. "It's his ankle - it was dislocated and it has now been put back. He is now in the hospital.”

popular
UK city named the 'most dangerous' in Europe, according to study
Incredible case of the only known individual whose parents were two different species
Mum cuts off boyfriend's 'private parts' after he 'tried to rape 14-year-old daughter'
Man gets full sized Stella tattoo on his head because he loves the drink that much
Rachel Bilson says Bill Hader's 'big d***' is the thing she misses most about him
TikTokers are utterly convinced there is a secret zombie apocalypse going on in China right now
UK public gathering for 'biggest and most united' series of protests over cost of living crisis
You may also like
Sport
Glazer family could sell minority stake in Man United
Sport
Cristiano Ronaldo cautioned by police over phone incident
Sport
Man United considering loan move for Christian Pulisic
Sport
Nigel Pearson says standard of refereeing has made him consider quitting football
Sport
Cristiano Ronaldo says he will reveal truth about Man United transfer saga
Next Page