The man behind Harry the Hornet has resigned

The end of an era at Vicarage Road

The man behind Harry the Hornet, Watford's match day mascot, has resigned from his role.

A tweet sent by Gareth Evans on Thursday afternoon confirmed that he was 'proud' of what he had achieved in the role and that he is 'heavy hearted' to be stepping away from the position.

I have officially stepped away from being the Match Day Mascot at #watfordfc my decision, proud of what I have achieved, the memories made and the experiences I’ve had - I was privileged and now heavy hearted also. Love you Harry! 🐝💛⚽️

The news comes after Harry the Hornet was recently criticised by Crystal Palace manager Roy Hodgson.

Speaking ahead of the Premier League game between Palace and Watford last month, Hodgson referred to an incident in 2016 in which the mascot had mocked Wilfried Zaha by diving after the winger had been booked for simulation.

"If you're asking me whether Harry the Hornet, who I presume is the mascot, should dive in that way, I think it's disgraceful," the former England boss said. "Because that’s not what football matches are about. If it's provoking the crowd into looking for something that's not there, it should be stopped." 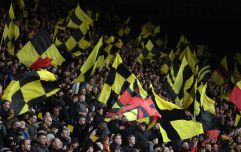 END_OF_DOCUMENT_TOKEN_TO_BE_REPLACED

Sam Allardyce, the Palace manager at the time,  said Harry the Hornet was "out of order" for the incident, but the Football Association decided against taking any form of disciplinary action against him.

The latest meeting between the two clubs at Vicarage Road passed by without any major incident, though Harry was videoed doing the Conor McGregor walk in front of the away end.