“Who gives a shit about that?” Harry Redknapp responds to latest Telegraph allegations

Harry Redknapp has insisted claims that some of his former players bet on their own match was “nothing to do” with him.

The former West Ham, Portsmouth and Tottenham boss is the latest high profile figure to be embroiled in the Telegraph’s investigation into football. 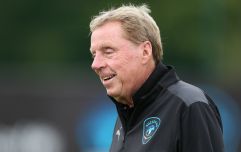 END_OF_DOCUMENT_TOKEN_TO_BE_REPLACED

The paper secretly recorded Redknapp discussing a match with football agent Dax Price, on which Price claims many of Redknapp’s then players had bet - which is against FA rules.

The paper has not named the match, the players or either of the clubs in question, but does say that bookmakers had given Redknapp’s side long odds on his team winning, because it was an end of season game and they had nothing to play for. They went on to win the game.

It is made clear that there is no suggestion that Redknapp knew of any betting when the match took place.

When the story was put to Redknapp he told the Telegraph: “Who gives a s--- about that?”

After being told it would have contravened FA regulations, he said: “Oh would it? Oh, OK. But not at that time I don’t think it was, was it? They weren’t betting on the other team, they were having a bet on their own team.” 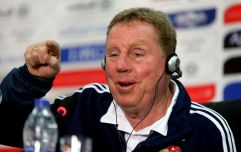 END_OF_DOCUMENT_TOKEN_TO_BE_REPLACED

He added: “Unbeknownst to me. No, not a spread bet. It wasn’t a spread bet. I think they had a bet on the game, but it wasn’t, that was nothing to do with me… after the game I’d heard the rumour the lads had had a bet that day… I’m not in control of whether they go and have a bet or not.”

He is also seen in the film allegedly discussing third party ownership, which is banned.

It is the latest twist in the Telegraph's ten month long sting into the workings of the game at the top level. 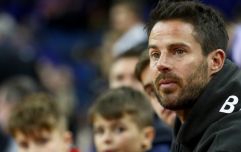 END_OF_DOCUMENT_TOKEN_TO_BE_REPLACED

On Thursday Barnsley sacked assistant manager Tommy Wright after he was filmed allegedly accepting a £5,000 cash payment from a reporter posing as the representative of a fictitious far eastern company looking to invest in football.

And the same day, the paper named Southampton assistant manager Eric Black when they claimed Black attended a meeting with agent Scott McGarvey and an undercover reporter earlier this month at a Hampshire hotel, where he was recorded on secret camera allegedly discussing payments to club officials.

A spokesman for Mr Black told the Telegraph: “[Mr Black] does not recall Mr McGarvey making suggestions that football officials should be paid during transfer negotiations – this was not the purpose of the meeting so far as our client understood it. Any suggestion that he was complicit in such discussions is false.”

As well as Allardyce, Wright and Black the investigation has also named QPR boss Jimmy Floyd Hasselbaink. The club responded by launching an internal investigation, but Hasselbaink himself denies any wrongdoing.

popular
Woman who saved enough to retire by 26 reveals three golden rules she stuck to
New Highway Code rule will fine drivers £1,000 for opening door with wrong hand
Fitness expert reveals army technique to fall asleep in two minutes
A definitive ranking of every swear word from worst to best
Bookmaker received $420,000 worth of bets on controversial Arsenal yellow card
Motorcyclist dies in crash live on TV while trying to escape police
Millions could get one-off cash payment to ease cost of living crisis
You may also like
Sport
It turns out Richard Keys really doesn't like Harry Redknapp after he 'f****d up' Birmingham, Portsmouth and West Ham
Entertainment
Harry Redknapp announces 2019 theatre tour
Entertainment
Six hilarious moments you might've missed during the I'm A Celeb 2018 final
Entertainment
6 hilarious moments from last night's I'm A Celeb
Entertainment
Six hilarious moments from last night's I'm A Celeb
Next Page