Although Harry Kane is yet to get off the mark for Spurs this season, the England striker finished the last campaign as the division's top scorer, so he was more than entitled to think he'd be awarded an elite rating in FIFA 17.

Ratings are a pretty big deal to players these days; who wouldn't want to score the perfect hat-trick with a virtual recreation of themselves? 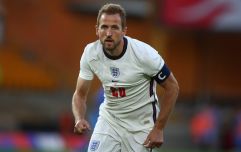 END_OF_DOCUMENT_TOKEN_TO_BE_REPLACED

It's no surprise that when Copa 90 sat down with the Golden Boot winner to reveal his stats for this year's iteration of the game, he was feeling confident.

But the 23-year-old couldn't help but look slightly underwhelmed when he saw his Ultimate Team board for the first time.

Kane's rating of 84 has actually risen by six from the 78 he had in FIFA 16, but he felt his shooting, defending and passing rankings left a lot to be desired. END_OF_DOCUMENT_TOKEN_TO_BE_REPLACED

After scoring 25 league goals last season he was adamant that his shooting should 'definitely be in the 90s'. He was also unhappy to see his defending stats go down from the previous game, and felt the 71 on passing was harsh. In summary: not chuffed.

To top it all off, the exchange ended with the interviewer accidentally dropping the card on the striker's foot. Oops.

The reason for Kanes goal drought? Watch when I dropped his FIFA17 rating card on his foot https://t.co/mYJl3eMr27 pic.twitter.com/ZlfROT4pMY

Still, Tottenham fans should probably take heart from their star man's begrudging acceptance of some of his FIFA 17 stats. After all, if there's one thing Harry Kane loves doing, it's proving the doubters wrong.

popular
Incredible case of the only known individual whose parents were two different species
Cyclists may have to get number plates under radical shake-up of road laws
Darius Danesh opened up about his health struggles before his tragic death aged 41
TikTokers are utterly convinced there is a secret zombie apocalypse going on in China right now
Alec Baldwin: 'Everybody who was there knows exactly who’s to blame' for Halyna Hutchins' death
Darius Danesh pictured with Gerard Butler before his death
Pop Idol star Darius Danesh found dead aged 41
You may also like
Sport
VAR controversially disallows Harry Kane goal as Spurs draw with Southampton
Sport
Andy Robertson is 'lucky to be walking', claims Clattenburg
Sport
Harry Kane makes classy gesture to Spurs fans after 34-hour journey to cancelled game
Sport
Roy Keane on the two players who it's 'not acceptable' to criticise
Sport
Roy Keane gets in brutal Spurs dig when discussing Harry Kane form
Next Page