Being honest, Hamza Choudhury's display at Goodison Park on New Year's Day was far from spectacular

Yet in this disjointed, stop-start opening to 2019 in the Premier League - settled by a smartly taken Jamie Vardy finish in the second half - it was difficult not to notice the 21-year-old's contribution to Leicester's win over Everton. And not just for his distinctive hairstyle.

Countless times in the first-half, as the home side looked poised to stir into life, it was a tackle, a block or an interception from Choudhury which disrupted them. In the early stages of the second, the Loughborough-born midfielder showed composure in possession, drifting down the right flank to offer support as Danny Simpson pushed forward from full-back. And then, following Vardy's goal, he was again responsible for thwarting several Everton attacks, helping Leicester hold on for all three points.

It was only last month that it seemed Choudhury, a product of Leicester's youth academy, appeared destined for another loan move away from the King Power Stadium in the new year. A handful of appearances towards the end of last season hadn't been enough to convince Claude Puel that he was worthy of regular playing time.

If an impressive showing in the League Cup against Manchester City in mid-December didn't change Puel's mind, his performances in the Premier League wins over Chelsea and City later in the month certainly did. His case was strengthened further still when Leicester followed those two victories with a surprise defeat at home to Cardiff at the weekend - a game for which Choudhury was rested. 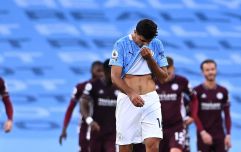 END_OF_DOCUMENT_TOKEN_TO_BE_REPLACED

The win at Goodison didn't provide much of a window into Choudhury's range of passing or qualities with a ball at his feet, but his supreme ability to read the game was there for all to see. Constantly, even when the ball was out of play, Choudhury was surveying the rest of the pitch. Checking right, then left; peeking over both shoulders and then back again - forever taking those mental snapshots of the field of play.

Though he rarely seemed to break into anything resembling a sprint, his sense of positioning and nous for sniffing out where the trouble would be meant that he seldom had to. And no, his defensive game wasn't flawless - there were a couple of occasions where his aggression and eagerness to win back possession cost his side free-kicks - but it was, unmistakably, another steady performance, especially from a young player still adjusting to rigours and intensity of the Premier League.

Their congested festive fixture list behind them, Leicester will look to build on what's been - blip against Cardiff aside - a successful spell. Having made a winning start to 2019, it seems safe to say that Hamza Choudhury, after another solid if not spectacular showing, has a prominent role to play in what lies ahead.


popular
Newcastle United sign bricklayer mate of Allan Saint-Maximin... no, really
Conor McGregor pays tribute as Khabib retirement blows division wide open
QUIZ: Name all 50 of these 2000s Champions League players
QUIZ: Name the obscure characters from The Simpsons (Part Two)
You'll have to be an old-school fan to get 20/20 in this 1990s footballers quiz
The JOE Pub Quiz: Week 214
Can you name every top European football club that begins with 'A'?