Say what you like about the Africa Cup of Nations, but it's always easy on the eyes.

Over the years African countries have well and truly put the rest of the world to shame when it comes to designing an international kit.

While Croatia certainly do their best to make sure there's always one nice bit of gear in Europe, the rest aren't so great.

So even if you get annoyed by the tournament taking away one of your team's star players every two years (or in back-to-back years, as happened in 2012 and 2013), you can take comfort in the fact they'll at least be looking good while your team struggles.

Ahead of next January's tournament in Gabon, three of the teams taking part - Ghana, Cameroon and Ivory Coast - have released their new kits. And to be honest, they're all scorchers.

First we have the defending champions Ivory Coast, who will look to retain their title in this tasty number...


They may have lost on penalties two years ago, but this kit is an absolute winner in our books.

It's simple without being boring, and features the country's famous black stars. But more importantly, just look at the collar and those sleeves... 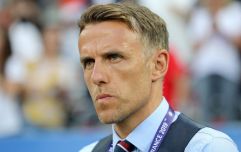 END_OF_DOCUMENT_TOKEN_TO_BE_REPLACED

But we've saved the best for last.

They may not have been crowned champions of the continent since 2002, but Cameroon have always been praised for their impressive kits.

And this year is no different, as they find a way to combine green, yellow and red once more without crossing over into tacky territory.

Just shut up and take our money.

popular
QUIZ: Can you guess the 90s children’s TV show from the character or presenter?
Can you guess which countries these beers are from?
Real Madrid post 45-word farewell to four-time Champions League winner Gareth Bale
You simply won't get full marks in our international football crest quiz
QUIZ: Can you name the 5 Liverpool players in 15 seconds?
Jurgen Klopp scolds Liverpool players for cheering Chelsea red card
The Mountain explains how he's been dieting to lose 36kg for Eddie Hall fight

You may also like
Sport
Cameroon's Onguene throws away water given to her by Dutch sub
Sport
Samuel Eto'o to buy house for homeless former Cameroon captain
Sport
Clarence Seedorf appointed as Cameroon manager
Sport
Watch: Video Referee madness as the wrong Cameroon player gets sent off against Germany at the Confederations Cup
Sport
Everyone's saying the same thing after Cameroon reach the AFCON final
Next Page