The match was due to go ahead in Jerusalem

Argentina have pulled out of a friendly match against Israel that was due to take place on Saturday in preparation for the World Cup. 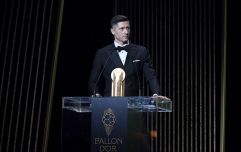 END_OF_DOCUMENT_TOKEN_TO_BE_REPLACED

Gonzalo Higuaín informed told ESPN that Argentina had "done the right thing" by pulling out of the game.

The cancellation comes after apparent political pressure on Argentina over the Israeli government's treatment of Palestinians.

120 Palestinians were  killed by Israeli forces in recent protests sparked by Donald Trump's decision to relocate the US embassy in Israel from Tel Aviv to Jerusalem.

Israel's defence minister has spoken out against Argentina, tweeting: "We will not yield before a pack of anti-Semitic terrorist supporters."

Palestinian Football Association chief Jibril Rajoub had been calling on people to burn the shirt of Argentina superstar Lionel Messi in protest against the game going ahead.

“He [Messi] is a big symbol so we are going to target him personally and we call on all to burn his picture and his shirt and to abandon him. We still hope that Messi will not come,” said Rajoub.

Israeli Prime Minister Benjamin Netanyahu also got involved, reportedly phoning Argentinian President Mauricio Macri to persuade him not to pull out of the match.

The plan originally was for the game to take place in Haifa, but Israeli authorities reportedly paid to have it moved to Jerusalem, which sparked the row.