We're real sticklers here, so we'll normally only give a nutmeg credit if it was clearly deliberate.

There are exceptions, however, such as this effort from Salva, the goalkeeper for Spanish Tercera División outfit C.F. Pozuelo de Alarcón. 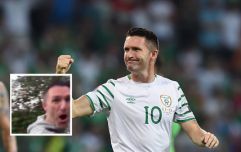 END_OF_DOCUMENT_TOKEN_TO_BE_REPLACED

Salva scored the only goal of the game away to Villanueva del Pardillo, which ought to be significant enough. You know, what with him being the goalkeeper and all.

But it gets better. The strike, from the edge of his own area, went through the legs of his opposite number as it hit the back of the Villanueva net after just one bounce.

90-yard nutmegs don't roll around all that often, and nor does the sight of one goalkeeper scoring from open play, but remarkably it seems to be the second time that Salva has achieved the feat.

But, according to the match report, that first goal 'many years ago' was ruled out by the referee, perhaps explaining why it looks as though there was a second's hesitation before he began his celebrations.

Just 200 spectators are thought to have been in attendance at Estadio Municipal de Los Pinos, where the match has played, but many more will have seen Salva's goal online.

popular
Jurgen Klopp reacted like everyone else to Darwin Nunez headbutt red card
Incredible case of the only known individual whose parents were two different species
Man, 27, who is engaged to great-great-grandmother, 74, slams critics of his 'perfect' relationship
Bulgarian mystic who correctly predicted Princess Diana’s death and 9/11 sees 2022 prophecy come true
Landlord faces £40k fine after tenant puts swimming pool on roof of flats
Angry woman confronts blind man at gym and accuses him of starting at her
Moment Jake Paul ends up in dramatic fight with YouTuber in club
You may also like
Sport
Luis Suárez scored his 100th Barcelona goal in some style
Sport
Can you name every Premier League goalscorer from 2016?
Sport
The Premier League has four days left to match the best Goal of the Month contest ever
Sport
We knew nine months ago that these were going to be the final three Puskas contenders
Sport
The best goal of the weekend came on a university gridiron pitch
Next Page