See? It's not all bad, this Nations League business

England's goalless draw with Croatia on Friday night - played out in front of empty stands and a group of travelling supporters watching from a nearby hill - wasn't exactly the best advertisement for the Uefa Nations League. Beyond dull, it was enough to make most of those who bothered sitting through it want to forget about the rest of this weekend's international football. 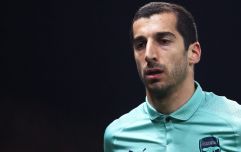 END_OF_DOCUMENT_TOKEN_TO_BE_REPLACED

24 hours on, a game being played on the opposite edge of the continent reminded us that Uefa's newest international competition can mean quite a lot to some people after all.

Having only become a Uefa-affiliated team in 2013, Gibraltar had lost every single one of their qualifying matches for Euro 2016 and the 2018 World Cup. There only two victories - over Malta and Latvia - had come in friendlies.

However, taking on Armenia in Yerevan, they were able to record their first ever competitive victory courtesy of a second-half penalty from Joseph Chipolina.

Armenia, who had Arsenal's Henrikh Mkhitaryan in their side, remain above Gibraltar in group D4 but only on goal difference.

The full-time whistle was greeted with scenes of celebration from the visiting players and coaching staff, as can be seen in the videos below.

Player celebrations at the final whistle as Gibraltar record their first ever competitive win pic.twitter.com/JiimKToBbd

The Armenian FA also apologised to Gibraltar after the wrong national anthem was played instead of theirs before kick-off.  Instead, the anthem of Liechtenstein was mistakenly played in the Vazgen Sargsyan Republican Stadium.

popular
Shocking footage shows moment man is killed by his own brothers
Addison Rae banned from TikTok
'Neighbour from hell' booted out of a retirement home for getting naked and threatening to stab resident
The JOE Friday Pub Quiz: Week 265
Gary Lineker pulls out of presenting MOTD due to 'super cold'
Man Utd defend decision to make 10 minute flight to Leicester for Premier League clash
Ole Gunnar Solskjaer to remain Man Utd manager despite run of poor results
You may also like
Sport
Arsenal could sell Mesut Ozil and Henrikh Mkhitaryan to reduce wage bill
Sport
Lacazette and Arsenal teammates tweet Premier League about Marcos Rojo own goal
Sport
Henrikh Mkhitaryan will miss Arsenal's Europa League trip to Qarabag
Sport
Henrikh Mkhitaryan might not be allowed to play in one of Arsenal's Europa League matches for political reasons
Sport
Paul Merson's Arsenal claim actually makes a lot of sense
Next Page