Amid the current refugee crisis, the stance of German football clubs and their fans has been admirable.

Multiple Bundesliga clubs have welcomed gestures from their supporters welcoming those fleeing war-torn regions, and now Schalke have gone one step further with their #StehtAuf ('Stand Up') campaign. 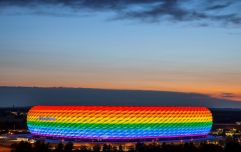 END_OF_DOCUMENT_TOKEN_TO_BE_REPLACED

Led by former Schalke winger Gerald Asamoah, who represented Germany in two World Cups after his family migrated to the country from Ghana when he was a child, the message is clear.

Fellow German club Borussia Dortmund have got behind the Royal Blues, sharing this very honourable message with the footballing world and describing the two clubs as "separated in colours, united in the cause."

popular
Two British men raped in Spain after being 'drugged while out on night out'
Groom shocks wedding by playing video of his bride cheating with her brother-in-law
Runner finishes last in 400m race as penis keeps falling out of shorts
Man has hand 'chopped off' outside working men's club in attack like 'a horror film'
Police catch car thief after noticing giant teddy bear is breathing - and he's hiding inside
Some Stranger Things fans are now trying to cancel Metallica
Brit tourist, 22, ‘raped by wealthy American holidaymaker in hotel toilet’ in Mykonos
You may also like
News
Jewish leaders criticise the 'abhorrent' sale of Adolf Hitler's watch
Sport
Jude Bellingham hits back at claim that he vomited during Germany vs England game
Sport
Over 800 banned England fans will have passports confiscated ahead of Germany game
News
Woman who secretly poked holes in partner’s condoms to get pregnant jailed
News
Ukraine calls on nation to criminalise pro-Russian 'Z' symbol
Next Page