Fulham players shared an emotional moment with disabled fan Rhys Porter after Aleksandar Mitrovic opened the scoring for the away side against Bristol City on Saturday. 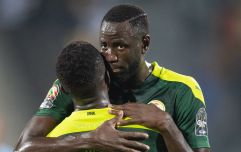 END_OF_DOCUMENT_TOKEN_TO_BE_REPLACED

The 13-year-old goalkeeper was supporting his team from the away end when the players ran over to include him in their celebrations after Mitrovic had put Fulham in front in the 50th minute.

Rhys - who has cerebral palsy - was also made an honorary member of the Fulham squad after he was subject to online abuse because of his disability, following videos he had posted online showing him making saves.

The Cottagers were keen to offer their support to the teenager, arranging a meet with defender Tim Ream on BBC Breakfast.

With Ream being one of Rhys' heroes, the experience of meeting him brought him to tears.

After hearing about the awful abuse that the youngster had received, Fulham stated: "Everyone at Fulham has been completely inspired by Rhys.

END_OF_DOCUMENT_TOKEN_TO_BE_REPLACED

"We wanted to show him just how impressed we've been with both his attitude in the face of adversity, and his commitment to helping others."

The London outfit also allowed Rhys to spend an afternoon with the squad, where he took part in shot-stopping drills with goalkeepers Marek Rodak and Paulo Gazzaniga.

Following the final whistle at Ashton Gate, some of the Fulham players took to social media to express their delight at being able to share the moment with the 13-year-old.

"Not the result Rhys Porter asked for but another cool moment shared and experienced," tweeted Ream.

Not the result @rhysporter__ asked for but another cool moment shared and experienced. Well done to the boys for recognising the opportunity to share the celebration. We go again Wednesday 💪🏼💪🏼 your support is always appreciated 🙌🏻🙌🏻 https://t.co/vaAY3Kz2cJ

As well as enjoying a number of experiences with Fulham, Porter was invited to Wembley stadium to train with the England cerebral palsy team.