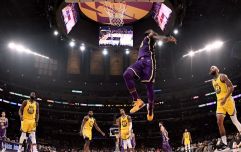 QUIZ: Can you name all the teams in the NBA from their locations?

END_OF_DOCUMENT_TOKEN_TO_BE_REPLACED

The 29-year-old (YES, 29!) has played for a variety of teams throughout his career, from DC United and Benfica to KuPS and the Tampa Bay Rowdies.

He now plays his football for Las Vegas Lights in the United Soccer League, the league directly below Major League Soccer (MLS) and while it is a world away from the days when he had a two week trial at Manchester United, but it's still football.

Now while Adu has never struggled to find a club, he had before this month been finding goals very hard to come by.

Thankfully, that all changed on Sunday during his side's 4-1 USL victory against Colorado Springs Switchbacks FC.

The eternal moment came in the 46th minute as Adu waited patiently for the ball to drop somewhere, anywhere, near him. Drop it did and with a slight scuff he did it. He scored a goal to break a three-year long duck.

Congratulations Freddy, long may it continue.

In case you missed our first 4-goal game of the season, relive the magic through full time highlights presented by @FindlayToyota! pic.twitter.com/c3CTmlwzDb