Francesco Molinari response to Masters disappointment says so much about him

This was a tough watch

Francesco Molinari played like a man destined to win the 2019 Masters over the weekend. 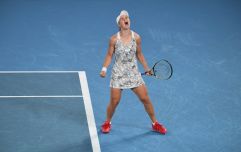 END_OF_DOCUMENT_TOKEN_TO_BE_REPLACED

For 65 holes, he was the golfer with the scrambling, putting, game-plan and temperament to win his first green jacket.

Then, on the 12th hole, a wheel came off. He found the water at that dreaded par three that has been a graveyard for the hopes of so many blazer chasers.

He eventually double-bogeyed but responded with a birdie and then a par. Then, 15 happened.

Molinari plonked his iron approach metres short of the green and into the water. He took a drop and nearly repeated the chalky dose. An ugly '7' was etched onto his scorecard as he dropped to four shots off the lead.

Molinari could have folded up the tent at that stage and signed off for a 76 or 77, but he battled bravely on.

END_OF_DOCUMENT_TOKEN_TO_BE_REPLACED

He got par on 16 and then birdied the 17th. It gave him a chance to pick up another shot on 18 and hope for Tiger Woods to falter.

He got par and Woods bogeyed, but it was enough for the American to win his 15th major.

Molinari looked to get off the 18th green to leave Woods to have his moment. There was a warm, congratulatory embrace at the end, and a few words shared, but the Italian will be haunted by his faltering finish.

Not long after he had signed for a final round of 74, Molinari fronted up to the media after his heart-wrenching finish to a great championship. He commented:

END_OF_DOCUMENT_TOKEN_TO_BE_REPLACED

"I am proud of the week. I fought hard this week. I think I found some new fans today with two double bogeys.

"I think I learned a lot. Next year I will come back and and it won't be the case where I have never played well here before.

"On the back nine, there were a couple of instances of not being aggressive enough and I lot a bit of focus. It is weird to say that but it is a long week and it is [hard to] keep focused 100 percent."

Back in 2006, Molinari caddied for his elder brother Edoardo when he played at The Masters, with Woods alongside him.

13 years later and the reigning Open champion, and 2018 Ryder Cup hero, looked to be penning one hell of a story. As it was, Woods' will trumped all and another story will be told of the 2019 Masters.

For Molinari to own his flaws, and vow to come back better for it, is the mark of the man.

Many golf fans will hope he gets another run at the coveted green again, in the near future.