Be warned, this is not for the faint of heart.

Former Chelsea, West Ham and Newcastle striker Demba Ba has been plying his trade in China for the last few months. Like many former Premier League stars, he has cashed in on the ridiculous wages on offer out east - like Italian forward Graziano Pelle who has been handsomely rewarded for making the move to China. 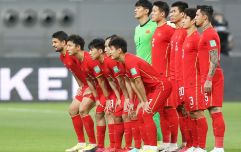 END_OF_DOCUMENT_TOKEN_TO_BE_REPLACED

The Senegalese frontman received a hero's welcome upon arriving in Shanghai, and is the runaway top scorer in the Chinese Super League so far this season.

However his season is now almost certainly over, after he suffered what looked to be a broken leg in Shanghai Shenghua's local derby against Shanghai SIPG. In a seemingly innocuous challenge, Ba suffered one of the most horrific looking breaks we've ever seen.

Both teams saw players sent off in a tight-fought match, but Ba's horrific injury - where part of his leg appears to turn in a different direction to the rest of his body - will have taken attention away from his team's 2-1 victory.

Before you play the video below, we'd like to warn you that the footage is graphic, and some people could find it upsetting.

Get well soon, Demba. It looks like he'll be out for a while.