No one likes to see a footballer get a career-threatening injury, even if it's a player from a rival team.

It's times like this that we take solace in the fact that the football community can come together to show solidarity with one of their own, and that's what has happened in the aftermath of Demba Ba's horrific leg-break. 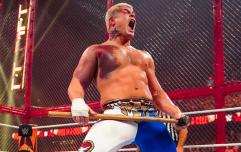 END_OF_DOCUMENT_TOKEN_TO_BE_REPLACED

The former Premier League striker suffered the injury during the Shanghai derby in China, and looks set for a long spell on the sidelines.

He was in fine goalscoring form at the time of the injury, leading the charts in the Chinese Super League, and fans will hope he makes a full recovery after his time out - something of which there is no guarantee.

Ba's former club Chelsea have wished the 31-year-old a speedy recovery, as have former team-mates and friends within the footballing world.

All at Chelsea FC send our best wishes to former striker @dembabafoot. Get well soon Demba.

Demba Ba all the best bro👊🏽 I wish you a speedy recovery. 🙏 @dembabafoot pic.twitter.com/fPKiU0O8tT

Wishing you a speedy recovery Demba Ba.
My prayers are with you. #staystrong #speedyrecovery #thatswhatwedo pic.twitter.com/0AAu5oozhX

Ba has scored more than 150 career goals at a rate of roughly one every two games, and had scored two hat-tricks as part of a 14-goal haul this season before his injury.

We would like to join the football community in wishing the former West Ham, Newcastle and Chelsea striker a full and speedy recovery.