It's all a matter of negotiating power.

Floyd Mayweather is of the opinion that he remains the biggest pay-per-view draw in combat sports while Conor McGregor believes that he's changed the game since Mayweather's retirement.

END_OF_DOCUMENT_TOKEN_TO_BE_REPLACED

Since the 49-0 boxing great hung up his gloves McGregor has won the UFC featherweight title, the UFC lightweight title and turned his rematch with Nate Diaz into the headliner of the best-selling UFC pay-per-view in history.

Even McGregor haters would have to concede that he played a huge role in the eagerness with which WME-IMG shelled out $4 billion to acquire the UFC last summer as he stands alone as the most reliable draw in the history of the Octagon.

But while rumours continue to intensify on the possibility of witnessing McGregor vs. Mayweather, 'Money' insists that he is waiting for his Irish rival to pull rank with his employer so that he would be free to make his boxing debut opposite Mayweather.

END_OF_DOCUMENT_TOKEN_TO_BE_REPLACED

Mayweather, speaking in an interview with BT Sport’s Rio Ferdinand, used the analogy of his 2007 fight against Oscar De La Hoya to express how he sees his negotiating power relative to that of 'The Notorious.'

"What I’m doing is trying to see if he’s really real. I’m at home enjoying the retired life," Mayweather said. "He keeps barking so I’m gonna pull your card and see if he’s really real. You keep barking I’m gonna see if you gonna bite, so let’s make it happen. Conor McGregor is not a boss cause if Conor McGregor was his own boss the fight would be made...

"We are waiting on you Conor what’s going on? We’re waiting to fight – you're talking about you wanting to fight. Let’s see if you’re really real. Let’s make the fight happen. When I fought Oscar De La Hoya, when I was the B side and he was the A side I didn’t complain. I said I know where I’m trying to go to, I know where I’m trying to get to, give me the money and let’s make it happen. Before you can become the A side you must be the B Side first. 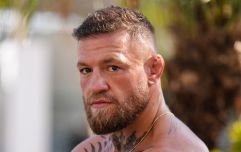 END_OF_DOCUMENT_TOKEN_TO_BE_REPLACED

"Financially wise I had to be the B side for that fight, but then after that fight, I earned a spot. So if Conor McGregor wants the A Spot, don’t cry and complain about the money. Be the B fighter, go out there and do what you have to do and you possibly can get a victory you can be the A side."

‘Watch ‘Rio Meets Floyd Mayweather’ on BT Sport 2 from 9pm this Saturday. You can also watch Gervonta Davis v Liam Walsh for the IBF Super-Featherweight title on Saturday 20 May live onBT Sport and BoxNation. Follow @BTSportBoxing on Twitter for all the latest news’