There were very dramatic scenes in the World Cup Qualifier between Poland and Romania on Friday night.

Play was brought to a halt for 10 minutes in the Arena National after a flare thrown from the crowd landed next to Robert Lewandowski and exploded just metres from the Poland captain. 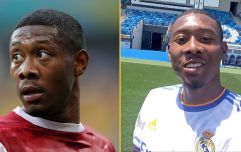 END_OF_DOCUMENT_TOKEN_TO_BE_REPLACED

The incident occurred as the Bayern Munich man was trying to organise his side's defence for a corner kick.

Lewandowski was near the front post on the six-yard box when the flare landed near his feet. He stood his ground, held his hands skyward to alert the officials when it exploded. As soon as it went off he fell to the ground in a heap clutching his face.

He stayed on the ground receiving attention from the medical staff for approximately 10 minutes until play resumed.

Lewandowski appeared to be fine after incident and did not need to be taken off. He played the entirety of the match, scoring a brace in the last 10 minutes, including a penalty in stoppage time, s Poland ran out 3-0 winners.

A lucky escape for Lewandowski, in a scene reminiscent of Croatia's Euro 2016 meeting with Czech Republic, where a flare exploded in a steward's hand.