Former WBC Cruiserweight champion Tony Bellew has poked fun at David Haye's lawyer Adam Morallee ahead of their rematch at The 02 Arena in London this weekend.

Morallee provoked the crowd at the press conference in Liverpool by pointing to those present, and Bellew, claiming that Haye would defeat the Liverpudlian in their rematch after Haye was stopped in the 11th round in the first fight last year.

Bellew was seen laughing at Morallee during the press conference and began his address to the crowd by comparing Morallee to Simon Bird's Will McKenzie character from The Inbetweeners.

🤣 "First of all, I'd just like to thank Will out of The Inbetweeners - He's just given me more motivation" - @TonyBellew responds to Adam Moralee's (Team Hayemaker) press conference comments #BellewHaye2 pic.twitter.com/oz42EM1cW7

Bellew added that Haye was fighting for his career in their rematch and that the former WBA heavyweight champion only returned to a rematch to 'rob the bank'.

"On Saturday, it comes to an end, it really does," said Bellew.

"For the first time in your career you are actually fighting for your career. 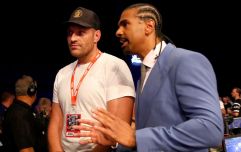 END_OF_DOCUMENT_TOKEN_TO_BE_REPLACED

"If this goes wrong, nothing can save you. I've done this five or six times. I know the kind of pressure it brings. You're in a lot of trouble on Saturday."

Bellew added: "David was amazed that I took the rematch. I'm doing it, and I'll do exactly what I did in the first fight.

"David is not back to win world titles, he's back to try to rob the bank. He wants to fight little fatties like me.

"Expect a cagey start, he'll show me the respect he should have shown me in the first fight, I'm sure. Saturday is time to go to war, and (Haye's) career ends in a beat."

popular
Johnny Knoxville left with brain damage after bull stunt in Jackass Forever
Teen brothers arrested for 'beating stepdad to death after he abused their half sister'
The Beast opens up about mental health after storming off The Chase
Sex expert reveals how men can last longer in bed
Moment thug kidnaps teenage ex in horrifying ordeal that left her unable to walk or talk
Kieran Trippier pinpoints Daniel Levy's biggest mistake in the transfer market
Coronation Street star left homeless after sharing anti-vax views
You may also like
Sport
Tony Bellew sends message to David Haye after retirement announcement
Sport
David Haye retires from boxing after latest defeat to Tony Bellew
Sport
Dereck Chisora and Dillian Whyte clash at ringside after Bellew vs. Haye II
Sport
David Haye's former coach got up and left the O2 Arena early
Sport
Tony Bellew: I'll knock Tyson Fury out! I know I can flatten him
Next Page