Disturbing scenes at Wembley Stadium in the first half

Hungary fans clashed with police in the away end on Tuesday night during their World Cup Qualifier against England at Wembley Stadium.

END_OF_DOCUMENT_TOKEN_TO_BE_REPLACED

Around 800 fans travelled from Hungary to watch their nation in action. A small cluster of them were seen in confrontation with stewards early in the first half. This appeared to escalate, with footage from inside Wembley showing police with batons being forced back down the steps onto the concourse below by the supporters.

England fans were heard booing the away section, but the trouble appeared to eventually die down without the game being interrupted.

Disturbance in the Hungary section. Fans fighting with stewards who eventually were forced to retreat. pic.twitter.com/MoGXR6dtpL

Before kick-off, a section of the Hungary support were seen with a banner which was an act of protest against the taking the knee gesture. This was also met with boos from the majority of those inside the stadium.

This comes just over a month after the last meeting between England and Hungary in Budapest where Raheem Sterling and Jude Bellingham were subjected to whistles and monkey chants during the Three Lions' 4-0 win at the Puskas Arena. 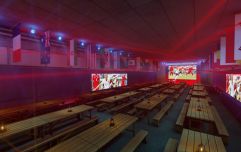 END_OF_DOCUMENT_TOKEN_TO_BE_REPLACED

Hungary had previously been ordered by UEFA to play two games behind closed doors after multiple incidents of racist and homophobic chanting during the European Championships, but were allowed to have spectators for the game against England as the game was under FIFA - not UEFA - jurisdiction.

Hungary took a surprise lead after Luke Shaw was adjudged to have kicked Loic Nego in the head when trying to clear the ball in the box, with Roland Sallai dispatching the spot-kick.

John Stones however equalised just before half-time with a strong header from a Phil Foden free-kick which had deflected off the back of Delcan Rice.