FIFA are dead against the formation of a breakaway super league

Fifa president Gianni Infantino has threatened to ban any players who compete in a 'European Super League' from competing in World Cups, after leaks reported by Der Spiegel exposed alleged plans among Europe's elite clubs to form a breakaway competition. 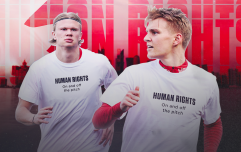 Qatar World Cup protests are too late... but they're far from pointless

END_OF_DOCUMENT_TOKEN_TO_BE_REPLACED

The reports claimed that several of the biggest clubs around Europe were planning to break away from their domestic leagues to form a 'super league' that would see the likes of Bayern Munich, Juventus and Real Madrid compete against one another week in week out.

Manchester United and Arsenal are among the teams allegedly involved but have also urged the most caution over the move.

FIFA are strongly opposed to the idea, and would ban players involved in a breakaway competition from taking part in the World Cup.

Infantino, speaking to a small group of reporters at Fifa headquarters, said the governing body would punish players if they left football’s organised structure to form a privately-owned league.

“Either you are in or you are out,” Infantino said. “This includes everything."

“The idea is if you break away, you break away. You don’t keep one foot in and one foot out,” Fifa’s legal director, Alasdair Bell, said. “That would be the general approach we would follow, but of course lawyers can debate this for a long time.”

Infantino recently floated the idea of revamping the Club World Cup, and claimed it is "the answer to any attempt to think even about any sort of breakaway leagues".