Oh, you thought Manuel Neuer was a maverick for dribbling 10 yards outside his own area, did you? Well he's an amateur compared to Fernando Muslera.

Uruguay international goalkeeper Muslera, who you may remember from his performance against England at the last World Cup, has been playing for Galatasaray for the last five years. Jordi Alba hit with missiles by fans during Galatasaray-Barcelona

END_OF_DOCUMENT_TOKEN_TO_BE_REPLACED

This weekend the 20-time Turkish champions beat Antalyaspor 3-1 at the Türk Telekom Arena, and Muslera decided to have a bit of fun.

After rushing to intercept a through-ball, it would have been easy for Muslera to panic and hoof the ball aimlessly away, or to shield it before going down for a cheap free-kick.

Instead, with Samuel Eto'o approaching and the ball skidding into the Antalyaspor half, he kept going, beating the Cameroonian and calmly laying the ball off to an outfield teammate.

We know what you're thinking - we've buried the lede here, haven't we? 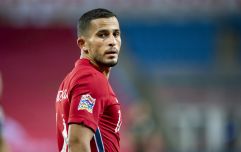 END_OF_DOCUMENT_TOKEN_TO_BE_REPLACED

The same Samuel Eto'o who wasn't young when he joined Chelsea from Anzhi Makachkala in 2013.

The same Samuel Eto'o who since played for Everton and Sampdoria, before offering two suspiciously similar goodbye messages to fans of the two clubs.

And, you know what, he's playing well. Now 35 years old of age, the former Barcelona striker has 21 goals in 35 games for Antalyaspor.

popular
Musa Yamak dead at 38: Unbeaten boxer suffers heart attack in ring and collapses
Johnny Depp reacts after Amber Heard’s lawyer impersonates his voice in court
Detective spots key clues in Johnny Depp and Amber Heard's body language during trial
Thomas Tuchel reveals Andreas Christensen has pulled out of several matches this season
Amber Heard denies assaulting ex-girlfriend in tense exchange with Johnny Depp's lawyer
Court shown private elevator moment between Amber Heard and James Franco
'Blood rain' and lightning is set to sweep across the UK this week
You may also like
Sport
Galatasaray player sent off for punching his own teammate
Sport
Galatasaray player pulls sickie, gets found out, immediately put on transfer list
Sport
Galatasaray to move for Danny Welbeck when Arsenal deal runs out
Sport
Chris Smalling's Instagram account has been hacked by a Fatih Terim superfan
Sport
Chaos ensues on the pitch after Istanbul derby between Fenerbahçe and Galatasaray
Next Page